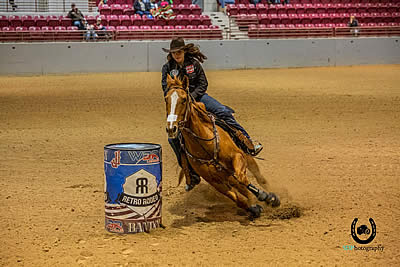 Jacksonville, FL (January 11, 2019) – The Jacksonville Equestrian Center rang in the New Year with a dash for cash that attracted the country’s top barrel racers. The No Bull Grand Slam barrel race was held January 4-6, 2019 and paid out more than $100,000. Entries totaled 1,000 for the weekend-long event.

“Some of the top barrel racers in country were there,” said Kyle Rictor, who maintained the footing during the show. “Anita Randle won the Grand Slam’s short-go and she is a NBHA World Champion. Brett Monroe finished third. He’s won over $1million in barrel racing.”

This was the third year the No Bull Grand Slam returned to the Jacksonville Equestrian Center.

“This is a full-service facility with the best staff that we see throughout the year,” said Jamie Cagle, the event secretary.

“It is a great location, with a nice facility that continues to evolve as the needs of its exhibitors grow,” said Gail Shrine, owner of the Feathered Horse competition series.

“We really love having our finals here,” said Katie Smith, No Bull Barrel Race competitor. “There are plenty of stalls and RV hookups to accommodate everyone. The whole facility is top notch; the location is central and great for us.”