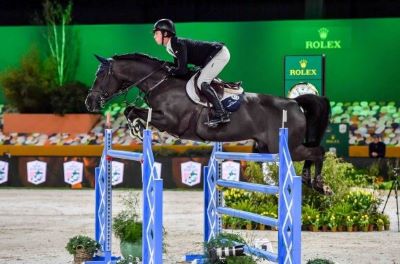 Forty-one horse and rider combinations from 15 nations made up the start list for the feature class on Day 2 of The Dutch Masters 2021 – the 1m55 Audi Prize. The star-studded line-up – which included former Rolex Grand Slam Live Contender, Philipp Weishaupt, 20-year-old rising British star and the next generation of show jumping talent, Jack Whitaker, and the on-form American, Laura Kraut – promised global equestrian fans watching online and on television a masterclass in show jumping skill and horsemanship.

After 10 starters, Kevin Staut and his 12-year-old bay mare, Visconti Du Telman, were the only pair to go clear, proof that course designer Louis Konickx had set a tough 13-obstacle, 16-effort test for both horse and rider. The Frenchman was soon to be joined in the jump-off by the only rider to have ever won the prestigious Rolex Grand Slam of Show Jumping title, Scott Brash, who steered his talented 12-year-old stallion, Hello Vincent, effortlessly around the Brabanthallen’s stunning arena. Current world number one-ranked Swiss rider Steve Guerdat also went clear, setting up a scintillating and fascinating 11-horse jump-off.

Second to go in the jump-off – a demanding seven-obstacle challenge – Brash was the first of the 11 riders to go double clear, setting off at blistering pace, navigating the course with typical precision, and stopping the clock on 36.16 seconds, a target that looked tough to beat. With just two additional riders managing to go double clear – Marlon Modolo Zanotelli from Brazil and German Christian Kukuk – it appeared as though the Scotsman had proceedings sewn up. However, Jack Whitaker had other things on his mind, and full of confidence, the Yorkshireman and his black mare, Scenletha, shaved a decisive 0.37 seconds off Brash’s time. Whitaker will have watched last to go Kent Farrington with his heart in his mouth, but the American was unable to topple him, eventually slotting into second place.

Thrilled with his win, Whitaker commented, “The feeling is fantastic! It’s what everyone comes here to do, and it’s what I came here to do, but amongst some of these world-class riders it’s a bit surreal when you win, so I’m a bit stuck for words, to be honest – it’s fantastic! It’s my first 5* win, and it hasn’t sunk in. But as I say, it’s what you come here to do, and I knew it was just a case of when it was going to eventually happen, and it finally has.

“Scenletha is unbelievable; she’s such a nice horse. She’s so consistent and she’s got a lovely character, but she’s also feisty. Tonight, she fought for me a bit, and I can’t thank her enough. She’ll get plenty of polos and pats later!

“I’d just like to say thank you very much to the young Riders Academy for putting me in this position, and for everything they’ve done so far. I just hope that they can continue supporting and helping young riders like me.”