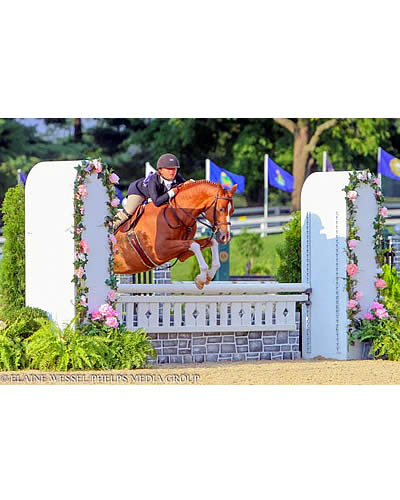 Lexington, KY – August 7, 2015 – Entering the final phase of competition with two blue ribbons already under her belt, Augusta Iwasaki, aboard her trusty mount Kingston, had a target on her back as the one to beat in the Large Green Pony Hunters. Already a weekly champion in Thursday’s Small Regular Pony Hunter division, Iwasaki was hoping to add another 2015 U.S. Pony Finals win to her list of accolades.

As the last to go, she and the chestnut Kingston were faced with the task of surpassing the 1,012.450 score set by competitor Ellia Giuliani and Brighton Decidedly, which the pair easily crushed with their cumulative score of 1,046.8 to sweep all three classes of the division and claim the lead spot in the victory gallop.

Called “Prince” in the barn, Kingston will surely be treated as royalty tonight, as he not only carried Iwasaki to her second champion tricolor of the week, but also the title of Grand Green Champion. Their overall score was the highest of the 208 Green ponies in the hunt for the Small, Medium, and Large size-based divisions throughout the Finals.

“He is never wild; he is always very sweet. He’s just perfect, always. He never puts a foot out of line,” Iwasaki sung the pony’s praises. “I’m very excited and very lucky to get to ride him. I want to thank Ava Peck for letting me ride this pony. He’s so perfect.”

The 11-year-old rider from Calabasas, California, opted to ride Kingston, owned by Peck of Topanga, California, instead of one of her own family’s horses, which ultimately proved to be a smart move. The pair has been together since January.

“This is definitely my favorite part of the week so far. I’m excited to hang up my ribbons and put up my trophies in my room when I go home. This was for sure worth the trip,” the young champion smiled. “The competition is one of my favorite things here; it’s much more competitive than at home. I think that the better competition makes me ride better.”

With one more pony still to ride this week, Iwasaki will try her hand at one more division, hoping to earn herself a third reason to celebrate in the Medium Regular Pony Hunters with Somekindawonderful.

Giuliani and Brighton Decidedly, owned by Morgan Munz out of Califon, New Jersey, maintained their reserve spot in the Large Green Pony Hunters as the only other pair to break the 1,000 point mark. Rider-owner Emma Seving and Captivating captured the third position, followed by Christina Judy’s Recess from Chesterland, Ohio, ridden by Camryn Halley, in the fourth spot. Rounding out the top six were Top That, owned by Emily Elik-Burtard of Ixonia, Wisconsin, and ridden by Giavanna Rinaldi, and San Francisco-based Pretty Penny Farm’s Splendid, with Ava Leraris in the saddle.

As the over fences portion of the Medium Green Hunter Pony division commenced, Emma Kurtz knew that she would have to navigate Truly Yours to a high-scoring ride to overcome her 21-point deficit behind Sophia Calamari and Unforgettable, the leaders after the model and hack portions of competition, and to jump from third position to the champion spot. Kurtz and Truly Yours ultimately did just that, impressing the judges to earning a 263-point score, the highest score of the over fences class, to secure the championship honors more than 10 points ahead of the next-closest finisher with 1,028.4 points.

“It is always such an amazing opportunity to get to ride the ponies I do. It is just so much fun. I love how family-friendly Pony Finals is – they make it really fun for everyone,” Kurtz commented.

Dr. Betsee Parker, out of Middleburg, Virginia, owns Truly Yours and has owned many ponies and supported numerous riders throughout the past years, but was quick to note Kurtz’s special place in her heart. Kurtz’s win marks a new milestone for Parker: her eighth consecutive year winning a division championship, an accomplishment no other owner has achieved.

“I have been very blessed to have Emma,” Dr. Parker said of the young talent. “She has had several champions with me. I feel very fortunate to have her and her mom. We brought her out to the George Morris clinic, and George really liked Emma. The first person who is going to hear about this win is George Morris.”

Dr. Parker added, “She is a very serious student. She tries so hard, and rides so many ponies and horses. I think she has a very bright future ahead of her. It has been really fun to see the children grow up.”

Regarding her future, at least for the next few years, the 15-year-old plans to continue working with green ponies and horses, hopefully racking up more accomplishments in the process.

“It is really fun to bring them along, see them excel and see them become the ponies they are today,” Kurtz said.

Clinching the reserve position was Iwasaki aboard her family’s Small Suggestion. Third place went to Vienna, piloted and owned by Samantha Palermo out of Merritt Island, Florida, followed by Calamari and Unforgettable, owned by Forget Me Not Farm in Wellington, Florida, in fourth position. Olivia Ferro in the irons aboard Anderin’s Momento for Linda Evans of South Hadley, Massachusetts, and Taylor St. Jacques with the ride for Danielle Roskens of South Lyon, Michigan, on Motown Mini swept the last two top six spots.

The Medium Pony Hunters kicked off their first day of competition Friday morning with over 150 ponies parading into the Walnut Ring for the model and under saddle classes. Vanessa Mazzoli of Rockford, Michigan, and her own Find the Love took the lead in the division with two top placings, concluding the opening day of competition with 512.79 points. She clinched the first place in the model, as well as the second place in the under saddle for a strong lead. Claire Campbell and Leon, owned by Madeline Schaefer of Westminster, Maryland, follow in the second place with 505.91 points, while Devin Seek and Heaven’s Sake, owned by Bibby Hill of Reddick, Florida, are only a hair shy with 505.67 points.

Down the road in the Alltech Arena, 34 Pony Jumper riders took center stage, with nine teams facing off in the Pony Jumper Team Championship. Riding in championship format, competing over two rounds of courses, it was Zone 4 that came away with the 2015 Team Gold. Riders Charles Smith, Chloe Farmham, Hallie Rush and Anna Reisling left nothing to chance as they overtook the competition to end the two rounds of competition with only 20 faults to their team name.

“Every single one of these riders contributed to this championship equally,” said Katie Maxwell, Chef d’Equipe of Zone 4. “I watched them grow as riders from each round. It was just phenomenal to watch them learn and explore the process and achieve what they did.”

Zone 4 didn’t kick off the competition with a strong lead, earning a team total of 20 for the first round total, but they returned for round two with their eyes set firmly on the top finish.

Charles Smith, 17, and Venice rode to a faultless second round score to set a trend for his fellow teammates. Chloe Farnham, 15, and Cookies & Cream duplicated his effort, while the youngest rider of the team, Hallie Rush, 12, rode to a four-fault score. It was 17-year-old Anna Reisling’s clear effort that confirmed their winning point total as she laid down the third clean round aboard Blue Me Away.

“It’s a rush for sure; you feel it out there, and then when [your team members] go in, you feel it,” Smith said. “I think that competing as a team is more difficult than the individual competition. When you are on a team, you are rooting for everybody; you want to see every person do well. We each have to put in the rounds in order to win, and it makes it that much more exciting.”

As the second round came to a close, a hush fell over the Alltech Arena as it was announced that there would be a jump-off. Maxwell admitted that she had lost count of the points by that time, but when the announcer said that it was for the two 28-fault teams, the cheers erupted from the riders, trainers and parents as it dawned on them that Zone 4 won its third Team Gold in four years.

“What a big opportunity this is, and having such an amazing team to go through this with, it has been such a wonderful time and experience,” Rush smiled as she held her trophy.

2015 marks Rush’s second time competing in the Pony Jumpers; however, the young talent is going into the Individual Championship on Saturday as the top ranked rider of the team, with only four faults.

For teammate Farnham, the pony jumpers were a change of scenery from competing in the pony hunters at the USEF Pony Finals. After feeling the surge of adrenaline and the taste of victory, Farnham admitted that she is never looking back. With rescue pony Cookies & Cream, Farnham plans to compete in many more events in the future.

The gold medal proved extra special for one rider on the team, 17-year-old Reisling. With her birthday approaching in November, her days as a junior are limited; however, it was on her bucket list to make it to the Pony Finals and compete for Zone 4 before aging out of the division.

“I didn’t get to do the championship when I was 13, but now, in my last junior year, my trainer asked me what I wanted to do, and I had my heart set on making it to the championships,” Reisling explained. “It is so exciting going out there, and there is so much energy packed into a little body.”

She continued, “It is so different than showing in the hunters. You have pressure lifted off of your shoulders. It isn’t about how the pony looks, but rather the athleticism. You have to focus on lifting your pony off the ground.”

It worked out to be the perfect situation for Reisling and Blue Me Away, the spunky gelding whose trademark move is starting out the course with a few strong bucks and cow kicks. His antics do not bother Reisling, who refers to his quirks as “personality.”

Blue just recovered from colic surgery after being found only a few months prior in a field with no pulse. Thanks to an insurance policy, he was rushed into emergency colic surgery where he pulled off a remarkable recovery.

“They removed 10 feet of intestine and he just popped right off the table,” Reisling laughed. “A few months later we were jumping him around, and now he is here.”

Although Zone 4 rode cloud nine after the announcement of their gold medal win, the silver medal was tied between Zone 2 and the combined Zone 9/10, both with 28 points.

Zone 2 chose to send in Claire Jones and Proven Therapy, but four faults at the fifth obstacle would leave the door open. Stephanie Don and Joel followed consecutively, putting in their fourth clear ride of the competition, and earning Zone 9/10 the silver medal, while Zone 2 took the bronze.

Don is currently tied with Elizabeth McDougald and Knock My Sox Off going into Saturday’s Individual Championship, each with zero faults.

The 2015 USEF Pony Finals competition continues Saturday with the Medium Pony Hunter over fences classes beginning at 9 a.m. in the Walnut Ring at the Kentucky Horse Park. The Pony Jumpers will conclude Saturday evening in the Alltech Arena with the individual final round and the farewell class.