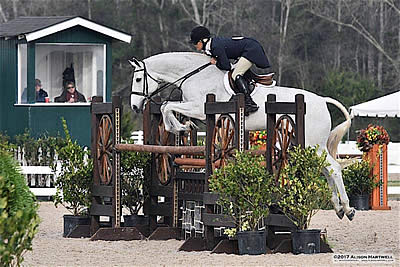 The $10,000 USHJA International Hunter Derby kicked off the hunter action Week II at the Gulf Coast Winter Classic Circuit. Helen Gilbert’s White Lightening, ridden by Holly Shepherd of Grand Bay, Alabama, galloped away with the blue ribbon after earning the highest Classic and Handy Round scores of 174 and 189.5, respectively, for a combined 363.5.

The second place ribbon was awarded to Fairfax, owned and ridden by Liz Hudspeth of Alpharetta, Georgia, after earning a Classic Round score of 160 and a Handy score of 187 for a combined 347.

Love Game, owned by EMC International and ridden by Evan Coluccio of Middleburg, Virginia, earned a third place ribbon with their first round score of 162 and Handy Round score of 174 for a total of 336 combined points.

Coluccio returned for a fourth place ribbon in the irons of Larry Antonini’s Six Pack after earning a Classic Round score of 159 and a Handy score of 155 for a total of 314.

Estander, owned and ridden by Leah Toscano of Chesterfield, New Jersey, placed fifth after earning 150 points in their Classic Round and a score of 154 for a total of 304.

The hunter grooms were recognized Friday thanks to Sheila and Shirley Murphy. Tito Aguilar won the class and the cash award. Second place went to Missie Morrissey and third place was awarded to Josette Ward. “The grooms are often the unsung heroes of the horse show world and this class is a great opportunity to thank them for their commitment to the well-being of our horses,” said Bob Bell, President of the Gulf Coast Classic Company.