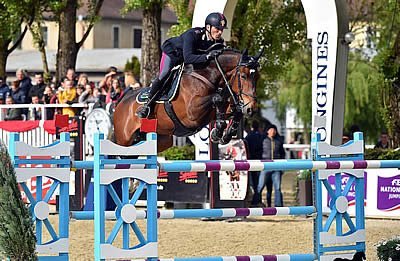 In a competition that could have gone either way until the last hoof crossed the finish-line, Team Italy secured a narrow single-fault victory over Belgium at the nail-biting opening leg of the FEI Nations Cup™ Jumping 2017 Europe Division 2 League in Linz, Austria.

It all hung on the performance of the last pair into the ring, Luca Marziani (37) and the 10-year-old stallion Tokyo du Soleil who had to jump clear if Italy was to take the honours for the seventh time in the 25-year history of the Austrian event.

“I didn’t feel pressure because I was sure I could do it – I was slow and I picked up a time fault, but it was the best deal I could do with such a young horse, so this is my third win in a Nations Cup and I’m very proud of that!” — Luca Marziani ITA

In the lead carrying just two faults after the first round, the Italians could have wrapped it up even earlier if Luca Moneta (49) could match the faultless second-round efforts of team-mates Emanuele Gaudiano (30) with Chalou and Davide Sbardella (43) with Triomphe van Schuttershof. But a surprise stop from Moneta’s Herold N at the vertical before the open water left it all up to anchorman Marziani.

Fabulous second-round clears from Pieter Devos, Neils Bruynseels and Jerome Guery had already fixed the Belgian finishing score at just four faults so there wasn’t much room for manoeuvre as the Italian set off for a second time. And his winning round wasn’t completely blemish free, the first element of the final double rattling loudly but staying in place before he broke the beam with the clock showing just a single time penalty to bring the Italian total to three faults.

Team Italy were not chasing points because they belong in the Europe Division 1 series, so the maximum Division 2 points went to Belgium with third-placed Great Britain next in line ahead of Czech Republic in fourth place.

Jerry Smit, Team Italy Chef d’Equipe, talking about his team’s performance: “After Emanuele had 12 faults in the first round it wasn’t easy, but his horse is very young and this is how it is in a team – everyone has to work hard and if you don’t do well then the others have to do better. This is the wonderful point of team jumping – you give your best for your colleagues and your country.”

Helmut Morbitzer, Linz Show Director: “This was a brilliant performance by the Italians and a day full of emotion for us as we celebrated 25 years of Nations Cup competition at Linz.”