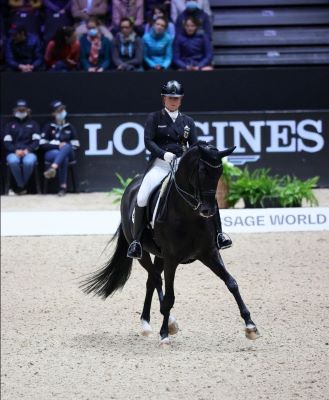 Dressage fans had the opportunity to enjoy the FEI Dressage World Cup Short Grand Prix presented by CREARA in the international arena of the Longines Equita Lyon, International Equestrian Competition. A great line-up of riders took part in this second stage of the Western European League of the World Cup circuit, under the watchful eye of the five international judges, presided over by Francis Verbeek from Holland.

The German rider Isabell Werth was the second to last rider to take to the arena, but it was almost no surprise to see the “queen” of the discipline win the class on her faithful and elegant Weihegold OLD, considering she has won so many medals in her career, was the reigning title holder, and is a regular participant in the Longines Equita Lyon event. The duo’s smooth performance won over the judges with a score of 78.421%. “It was quite exciting because we were competing in a new Grand Prix format for the first time. I am really delighted with my mare; she was a little bit nervous with this new routine, but she did her job really well. I am so happy to be back at Longines Equita Lyon. This is really one of the most wonderful indoor competitions in the world, so it’s just fabulous to be able to compete here again,” said the champion after the awards ceremony. In second place, the German rider Frederic Wandres and Duke of Britain FRH presented a very impressive routine with a score 75.947%, their personal record. Denmark’s Nanna Skodborg Merrald and Atterupgaads Orthilia also achieved their best score in this exercise with 75.342%, taking third place.

One of the most eagerly awaited pairs was the Danish rider Cathrine Dufour (world number 2) and her young nine-year-old Vamos Amigos, who were competing in Lyon for the first time. A great first at this level for the young horse, which was perhaps a little nervous at the beginning of the routine, finally scoring 73.895% and finishing in sixth place on the day. Having already won the Lyon stage in 2015, Spain’s Beatriz Ferrer-Salat presented her Tokyo Olympic horse, Elegance, taking fifth place with a score of 75.026%. During the morning, the spectators also had the pleasure of seeing the young Spanish trainer Juan Matute Guimon, riding his fifteen-year-old Quantico, finishing this regular Short Grand Prix with a score of 71.842%. As the first Moroccan rider to represent his country at the 2012 London Olympic Games and the World Championships in Caen in 2014, Yessin Rahmouni was competing for the first time in Lyon on All At Once (the horse he rode at the Tokyo Olympics), achieving a score of 69.526%.

As regards the French riders, Anne-Sophie Serre and Actuelle de Massa were the first out, scoring 69.605%. The second French couple – and bronze medallists at the last French Championships – Pierre Volla and Silvermoons Mariechen, presented their first routine at this level of competition, scoring 68.184%. Marie-Émilie Bretenoux and her faithful Quartz of Jazz posted a total of 68.553%. Finally, Sir Donnerhall II OLD and Morgan Barbançon put in a fine performance with a score of 72.079%, the best French result of the day, giving them an honourable 8th place finish.