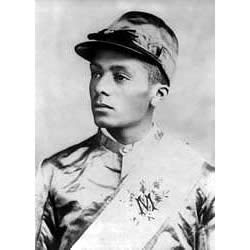 LEXINGTON, Ky. (Oct. 19, 2015) – As part of a celebration taking place in Lexington in October honoring the great 19th-century jockey Isaac Burns Murphy, the Kentucky Horse Park will unveil a newly engraved headstone for Murphy as well as tributes to him and Kentucky’s African-American horsemen. The ceremony will take place at the park’s newly renamed Man o’ War – Isaac Burns Murphy Memorial on Thursday, Oct. 22, at 2 p.m., and includes Dr. Pellom McDaniels, author of “The Prince of Jockeys: The Life of Isaac Burns Murphy.”

One of the greatest jockeys racing has ever known and one of Kentucky’s most famous sons, Murphy became one of the nation’s most famous and respected sport’s figures. He won an unmatched 44 percent of his races, and was the first jockey selected for membership in the National Museum of Racing and Hall of Fame.

At this event, the park will introduce new interpretive panels at the site “Isaac Burns Murphy,” “African-Americans in Racing,” and “Kentucky’s African-American Horsemen,” to share their important stories with future park visitors. Murphy’s panels include more accurate information that has recently become available after years of research by dedicated community leaders. Following this event at the park, there will be an unveiling of interpretive panels at 3:30 p.m. at the Isaac Murphy Memorial Art Garden recounting Murphy’s life, describing his homesite, and recognizing the contributions of other African-American jockeys.