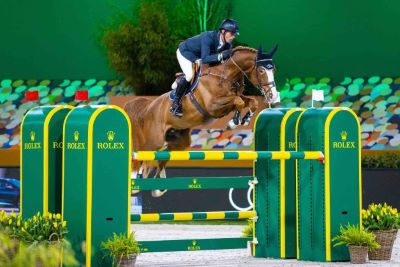 The Dutch Masters returns from 11-13 March and will play host to the first Rolex Grand Slam of Show Jumping Major of the year. The three-day show will culminate with the Rolex Grand Prix on Sunday, where the world’s best show jumping combinations, including seven of the world’s top 10 ranked riders, will be vying to claim the prestigious trophy and become the new live contender of the Rolex Grand Slam of Show Jumping. The bright lights of the Brabanthallen will once again shine on the famous arena as crowds are welcomed back to witness world-class equestrian action.

The current live contender Martin Fuchs will be looking to secure a win in the Rolex Grand Prix to continue his quest to become only the second rider to win the Rolex Grand Slam of Show Jumping. Following his historic win at the CHI Geneva 2021, in which he was the first person to win back-to-back Rolex Grands Prix, the on-form Swiss will ride Chaplin. The bay stallion is an indoor specialist, has many Grands Prix wins under his belt already, and is armed with the agility and experience to succeed in the tight Brabanthallen arena.

Daniel Deusser is looking to secure the bonus for winning two Rolex Grands Prix out of four, after his win aboard Killer Queen VDM at CHIO Aachen in 2021. The German who has spent the majority of the year out in Florida competing in the Winter Equestrian Festival, will ride Scuderia 1918 Tobago Z, who is an expert indoor horse. Deusser has previously won the Grand Prix at The Dutch Masters twice before, so will be looking to capture a third to secure the 250,000 Euro bonus. Following on from his victory at the CSIO Spruce Meadows ‘Masters’, Swiss rider Steve Guerdat will also be aiming for the same bonus.

Last year’s victor Max Kühner returns with all the knowledge of how to win amongst a top-class field at ‘s-Hertogenbosch. The Austrian will bring a strong team of horses to The Dutch Masters, with either last year’s winning horse Elektric Blue P or Eic Coriolis des Isles as his choice for Sunday’s Rolex Grand Prix.

Current reigning Olympic individual champion and World No. 5 Ben Maher finished last year off in exceptional fashion with a win at CHI Geneva in the Rolex IJRC Top Ten Final aboard the infamous Explosion W. The British star who has also based himself out in Florida for the winter season, will return to Europe to contest The Rolex Grand Prix in ‘s-Hertogenbosch for the first-time aboard the striking chestnut gelding, who was born approximately 10 kilometres away from the world-renowned Brabanthallen.

Compatriot Scott Brash, the only rider to claim the Rolex Grand Slam of Show Jumping, will be aiming to restart his quest to win the elusive title once more. The Dutch Masters is the only one of the four majors that has eluded Brash, so he will be sure to bring his top horse to win this prestigious class.

Rounding off a strong contingent of British riders is the up-and-coming Harry Charles. Following a stellar end to the year in 2021, the 22-year-old is now the Under-25 World No. 1, and will be looking to claim his first Rolex Grand Prix. Will one of these riders be able to become the first British winner since Robert Smith’s victory in 2003?

The home crowd will be hoping to see Harrie Smolders do one better than his second-place finish in the Rolex Grand Prix at CHI Geneva in 2021. The Dutch fans will be sure to be alight with excitement when Smolders enters the arena. The Dutchman will be joined by 12 of his fellow nationals, including Maikel van der Vleuten and Jur Vrieling.

2020 team Olympic Games gold medallist, Henrik von Eckermann, will also be contesting the Rolex Grand Prix. The Swede won here in 2019 and will be looking to emulate his success as one of only two Swedish riders competing at The Dutch Masters, after World No. 1 Peder Fredricson withdrew from the competition.

As excitement builds for the first Major of the year, will Fuchs’s quest for show jumping’s most coveted prize continue or will there be a new live contender?