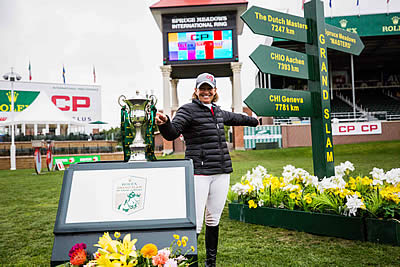 The CP ‘International’, presented by Rolex at the CSIO Spruce Meadows ‘Masters’ is notoriously difficult to win – were you confident ahead of the class?

I have to say I was having a really good week with Darry Lou. He won the big class on Friday, so he felt like he was on good form which gave me confidence that he would be good on Sunday too. He is such a consistent horse, so although it’s always hard to win at The Masters, I thought I might have a good chance.

How did this victory feel compared to your previous Grand Prix win 14 years ago?

The first time I won the big Grand Prix at Spruce Meadows, the weather was really bad and there was controversy surrounding the Nations Cup the day before, so it was great that I ended that week on a good note. This year the weather was so good to us and I felt that the horse deserved a really big win, so it was exciting and certainly a moment I really remember for years to come.

How do you stay at the top of your game?

I think I’m very lucky that I have a great team behind me. From my husband, to the owners and the sponsors – they make my life so much easier. I’m able to work with some very good horses so it’s always exciting and inspiring for me. Obviously, a little financial backing helps as well. Some members of our staff have been with us for over 20 years, so we have an amazing team and that’s a constant support for me.

How has the sport evolved since you started competing professionally?

The breeding, the types of courses, and the universality of the sport have all changed massively. So many riders from all over the world are now riding with similar styles, the horses are lighter going than in the past, and the courses are more careful and technical. Because of the technicality of the sport, it takes longer to develop a top Grand Prix horse. Many years ago, you might see a 6-year-old in a Grand Prix, but those days are over. Also, the prize money has skyrocketed which makes the sport even more competitive and more commercial.

Could you talk about the time you needed to win prize money to fly home?

Well my husband had a sales business, so only one of the horses we had was owned by someone else. However, we were paying all the expenses on that horse and the others who we owned at least part of. So, when we took our first trip to Europe to compete, we had enough money to get there, but after that, we had to win enough money to get to the other shows and to get home – no pressure! Luckily, we were able to help our team win the Nations Cup in Rome and went on to win some classes at other shows. I think we went home with money to spare.

How has the travel of horses affected the sport?

The ability to fly horses all around the world has made it possible for many more countries to have top sport. When riders and horses were more confined to staying within their country or continent, they weren’t able to compete against each other. Now many more riders are exposed to top sport and able to raise their level of riding to compete at the top. When we are able to easily ship horses in and out of places like India and China, our sport will grow rapidly.

How has the Rolex Grand Slam of Show Jumping enhanced the sport?

The Grand Slam is a great concept that certainly creates further excitement within our sport. It also has brought incredible prize money to the sport and encouraged other competitions to increase their prize money. I think the Grand Slam involves some of the best shows in the world, so every rider wants to win the Grand Prix at any single event of the series which makes it all the more special. The riders don’t just go to the shows because they have to in order to win the bonus; they go to the shows because they are special, and the possibility of a bonus is even more incentive.

Can you talk a bit about Darry Lou, his personality, and what he’s like back home?

Darry Lou is a really special horse. He is very confident in himself, but at the same time, he is very sweet and always wants to please. I think he had a wonderful upbringing in Mexico, so it was an easy transition when we became partners. One thing he loves to do is roll. I don’t know if he likes the rolling or just likes to be dirty, but he is a professional roller.

How important is the role of owners in the sport?

The owners are a very important part of our sport. These days more than ever, we all need good financial backing to have the horses it takes to compete at a high level. Even buying young horses is more difficult than say 10 years ago. When we find one and develop it, then we need to be able to afford to keep it also. So even though I feel it still can be done without a huge budget on occasion, the owners who support us so loyally are essential to our success in the sport.

If you could give a piece of advice to your younger self, what would it be?

I think it’s a little tough to break into this sport in some ways, but the sport is growing all the time which opens up more and more opportunities for people. I think it’s important for young people to always try to make a good impression on other people. You never know who your future employer or sponsor or partner might be. You can definitely help create your own opportunities.

What is your earliest riding memory?

When I was probably four or five years old my brother and I got ponies for Christmas and my mum had a small horse truck that was parked outside our house. So, on Christmas morning we met our new ponies and went for a ride. It was so exciting!

Is there a sportsman/woman outside riding that you admire?

It’s hard to say, but I am a Green Bay Packers football fan, so I would have to go with Aaron Rogers.

How will you be preparing for Geneva?

I have done three indoor shows in North America with my horses Coach and Garant to prepare for Geneva. Now they have a short break before they travel to Europe where they will do a 2* in Sentower Park as a warmup for Geneva. The plan is to bring both Garant and Coach to Geneva for the Rolex Top Ten Final and of course the Rolex Grand Prix.