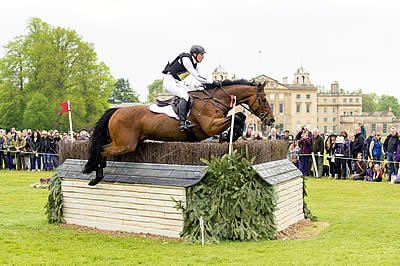 Influential cross country day sees Michael Jung (GER) and Sam move up to second ahead of Andrew Nicholson (NZL) and Nereo with just 0.8 between the top three

German Olympic rider Ingrid Klimke rode an exhilarating cross country round on Horseware Hale Bob at the Mitsubishi Motors Badminton Horse Trials, fourth leg of the FEI Classics™, and holds a slim 0.4 penalty lead over defending champions Michael Jung and La Biosthetique Sam who were outstanding to finish on their dressage score at the end of a thrilling day’s 4* competition.

“I walked the course with Andrew [Nicholson] and I watched Michi [Jung] and I hoped to do as well as them. It was a difficult course – there certainly wasn’t time to wave to the crowd – but Bobby was so full of himself and was pure pleasure to ride.” — Ingrid Klimke (GER)

Brilliant Kiwi rider Andrew Nicholson, who was last on course on Nereo, brought the day to a nail-biting climax and is now in third place, just 0.8 behind Klimke.

New course-designer Eric Winter’s track proved as influential as anticipated. Dressage leader Christopher Burton (AUS) on Graf Liberty had a surprising refusal at the third log element of the Hildon Water Pond (fence 15) and third-placed Irishman Jonty Evans (Cooley Rorkes Drift) was going brilliantly when he had a disappointing run-out at the second corner at fence 21.

“Sport’s all about confidence and I’m going to try and take some confidence from it. We made one little mistake, which was my fault, but we’re going home to reboot and aim for the Europeans.” — Jonty Evans (IRL)

There were 32 clear rounds and 49 finishers from the 81 starters. Only two were inside the time of 11 minutes 34 seconds: Jung and New Zealander Tim Price, who has leapt 30 places to fourth on Xavier Faer. Sir Mark Todd (NZL) has two horses inside the top 10, NZB Campino, fifth, and Leonidas, ninth.

‘You couldn’t be casual and lollop along. Perhaps it’s my age, but I don’t think I’ve ever concentrated so hard!’ — Andrew Nicholson (NZL)

The home crowd had little to cheer about after the dressage, but strong clears by British first-timers Ros Canter (Allstar B) and farrier Alexander Bragg (Zagreb) have moved them up significantly to sixth and eighth places; Oliver Townend shot up from 47th to sixth on ODT Ghareeb and Gemma Tattersall from 67th to 12th on the ex-racehorse Arctic Soul.

The jumping phase promises to be an absolute thriller with 0.8 of a penalty separating three greats in the sport.