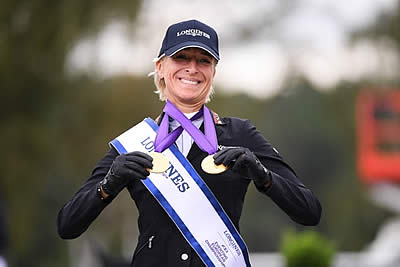 The popular and ever-gracious Ingrid Klimke (GER) thrilled her mass of cheering, flag-waving supporters by conjuring a faultless Jumping round from her wonderful horse SAP Hale Bob OLD to clinch both the team title for Germany as well as her second successive individual gold medal at the Longines FEI European Championships, held in her home country at Luhmühlen.

Klimke, who lost her grip on the world title last year when hitting the very last fence at the FEI World Equestrian Games™ in Tryon (USA), never looked like making a mistake on the spring-heeled Bobby, and she left her team mate Michael Jung, who was bidding for a record fourth European title, no margin for error.

When Jung’s fischerChipmunk FST, a horse that is surely a thrilling prospect for Tokyo, hit the second part of the double at 10b, Klimke smiled in rueful sympathy before dancing a jig of excitement.

“I definitely came here to win for sure. It was so close, but this year the luck was with me,” said Klimke. “It’s really special knowing that there are so many very quality riders and horses.”

Klimke paid tribute to her long-time Jumping trainer Kurt Gravemeier, who came to walk the course with her, and said that this victory for Germany would be “a positive wind” for the Tokyo Olympic Games next year.

Jung was sportsmanlike in defeat, describing the weekend as “super sport.” He explained: “I was a little bit too fast in the last combination, but this little mistake has not made the whole week bad, so I am very happy. We are a great team and we still have one more year to work on little details and I think we are well prepared for next season.”

Germany’s team gold, their fourth European title since the country’s dazzling run of success began at Luhmühlen in 2011, was never really in doubt with their comfortable three-fence margin after Cross Country, but the fight for silver and bronze medals became an intriguing game of snakes and ladders as team fortunes ebbed and flowed over what was a relatively straightforward Jumping track.

Great Britain just managed to hold onto team silver – by 0.3 of a penalty – as Oliver Townend (Cooley Master Class SRS, ninth), Piggy French (Quarrycrest Echo, 15th), and Pippa Funnell (Majas Hope, 22nd) each clocked up four faults. Townend, for whom it was a personal best team performance, did well to recover his composure after Cooley Master Class got too close to the planks at eight and crashed through the fence.

Sweden, silver medallists in 2017, were the beneficiaries of a titanic struggle for the team bronze medal, securing qualification for the Olympic Games in Tokyo next year in the best possible style with superb clear rounds from Ludwig Svennerstal (El Kazir SP, eighth), Louise Romeike (Wakiki 207, 12th), and Ebba Adnervik (Chippieh, 23rd).

Svennerstal said: “The Olympics is really the highlight for us. It’s very important for our federation and for ourselves. The team has worked really hard to achieve this and we’re extremely happy. I think we had a slightly disappointing start to the week and then we regrouped and everyone in the whole team, including behind the scenes, has been working very hard and we’re very happy with the outcome.”

France’s grasp on the bronze medal was already precarious when Alexis Goury withdrew Trompe l’Oeul d’Emery at this morning’s horse inspection. The 2003 and 2007 European champion Nicolas Touzaint put France back in the hunt with a magnificent clear round on Absolut Gold HCD, but medal success hinged on Lt Col Thibaut Vallette delivering a clear round. Unfortunately, Qing de Briot hit the fifth fence, putting paid to both France’s team and his own individual medal chances by frustratingly small margins.

Italy, with a clear round from Arianna Schivo (Quefira de l’Ormeau, 17th), looked threatening until Pietro Roman (Baraduff) incurred eight faults and Giovanni Ugulotti suffered a nightmare 22.4-penalty round on Note Worthy. This relegated Italy to fifth, but at least with the compensation of the second available Olympic qualifying slot.

Ireland finished sixth, a weekend of mixed fortunes being compounded with the overnight withdrawal of Ciaran Glynn’s November Night. However, there was a clutch of clear rounds from riders in the top 10 and the supremely talented Cathal Daniels (IRL), riding the diminutive mare Rioghan Rua, was the one left at the head of the queue for the individual bronze medal. The 22-year-old from Co Galway is Ireland’s first European individual medallist since Lucy Thompson in 1995.

“It’s an amazing feeling!” he said. “I’ve gone through Juniors, Young Riders, and now seniors with this mare. Unfortunately, the team didn’t get as strong a result as they wanted, but I was glad I was able to get a medal and keep spirits high and build again for next year on the road to Tokyo.”

The Olympic countdown has already begun!