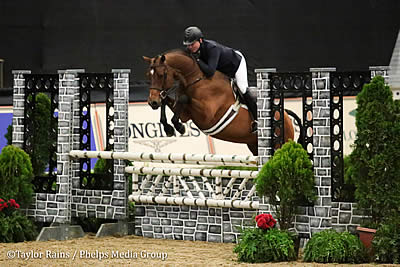 Lexington, Ky. – Nov. 2, 2018 – The National Horse Show debuted a brand new competition on Friday evening in the Alltech Arena: the $50,000 National Horse Show Hunter Classic. Similar to the world famous horse show, now in its 135th year, the sport of hunters is deeply rooted in tradition and history, and the National Horse Show was pleased to showcase the grace and beauty of the nation’s top hunter horses and riders in its 2018 event at the Kentucky Horse Park, where the inaugural prize went to Scott Stewart and Lucador. His top score also earned him a one-year lease of an Audi from Audi of Lexington, presented by Samuel A. B. Boone, as well as the lion’s share of the Leading Professional Hunter Rider Bonus.

The pair stayed true to their winning ways as Stewart, of River’s Edge Farm in Flemington, New Jersey and Wellington, Florida, secured the coveted Leading Hunter Rider Award for the 12th time in his career on Wednesday at the National Horse Show, while Lucador, owned by Dr. Betsee Parker, earned his fourth career and second consecutive Grand Champion Professional Hunter title.

Horse-and-rider combinations awarded championships or reserve championships in their respective hunter divisions earlier in the week were eligible to compete in Friday’s $50,000 National Horse Show Hunter Classic, with participants competing at the respective height (3’6”, 3’9”, or 4’) of the section from which they qualified.

The class, which counted towards Horse of the Year points, consisted of two rounds, with the top 12 returning for a second round from low to high score within their respective heights of 3’6” and 3’9”, with no 4’ entries earning a spot in the second phase. The final average score from round one was added to the final average score from round two to determine the overall total final score and winner.

Under the watchful eyes of two panels of judges consisting of James Clapperton, Daniel Robertshaw, Walter T. Kees, and Chance Arakelian, Friday’s first round course, designed by Bobby Murphy, welcomed 32 horses and riders to demonstrate their style and athleticism over obstacles composed of a variety of natural elements.

Tracy Fenney and MTM Farm’s MTM Outbid led the way after the first round with a score of 89, but Stewart followed close behind with the 10-year-old Oldenburg gelding and a score of 87.25.

Returning for the second round, the top 12 combinations were tested once more in the handy phase of competition. An unfortunate bobble in round two caused Fenney to slip down into 10th place in the final standings, which left the top spot open for Stewart as the final entry in the class. Stewart stayed consistent and impressed the judges with another solid performance to finish round two with a score of 87.5 for a total combined score of 174.75.

Finishing behind Stewart and taking home reserve honors was Kentucky native Havens Schatt, from Georgetown, Kentucky, and Diatendro, owned by Kelley Corrigan. The pair finished the first round in fourth place with a score of 85 and received a score of 86.5 in round two for a total score of 171.50.

Rounding out the top three was Amanda Steege of Ocala, Florida and Zara, owned by Frances Moppett, who were awarded scores of 86 and 84.5 for a cumulative tally of 170.5. Steege and Stewart were the only two entries to qualify two mounts in the handy round. Stewart also rode Dr. Parker’s Private Life to an 11th place finish, while Steege piloted Cheryl Olsten’s Lafitte De Muze to seventh place.

Earlier in the day in the junior ranks, Jordan Allen and Ramble On Farm’s Rockette had reason to celebrate as the best-performing junior pair out of nearly 60 exhibitors. Thanks to consistently high-scoring rounds, the duo accumulated more points than any other competitors across the four junior divisions comprised of small and large hunters split by age groups, and they were rewarded with the title of Grand Junior 3’6” Champions and the Huntland Perpetual Cup. Even more impressive was the fact that Allen only first sat on the horse Thursday, the same day they took to the show ring and earned top ribbons.

Over the course of the two days of competition, Rockette garnered first place in the under saddle and stake class and third place in the over fences and handy classes to secure championship honors in the Gochman Family Large Junior 16-17 Hunter division, in addition to the Cantitoe Farm Challenge Trophy. Adding another accolade to their growing collection, Allen and Rockette also earned the “Inclusive” Perpetual Cup, chosen by the judges as the best performers of the group from both the Large Junior 15 and Under Hunter and Large Junior 16-17 Hunter stake classes.