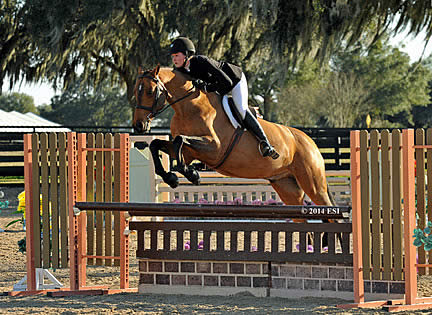 OCALA, F.L (January 20, 2014) – Hunter Holloway and Hay’s Investment Corp.’s Lyons Creek Bellini highlighted hunter action at HITS Ocala off with a blue ribbon this week. They rode to the top of the $5,000 Devoucoux Hunter Prix and got an early start on 2014 qualifying for the Diamond Mills $500,000 Hunter Prix Final. The final will take place during the HITS Championship at HITS-on-the-Hudson in Saugerties, New York this September.

“We are very excited about how the circuit started,” said Holloway, who hails from Topeka, Kansas.

“I just kept thinking about how I wanted to make it to that last fence,” she added candidly.

Holloway topped both rounds, scoring a 90 in the first round and an 86 in the second to lead all contenders with a total of 176. She piloted Lyons Creek Bellini, a seven-year-old Warmblood gelding, who carried her to an impressive fourth-place finish in the Diamond Mills $500,000 Hunter Prix Final last year. “Our goal is definitely to qualify again and make it to Saugerties,” said Holloway.

The 16-year-old rider also has big plans outside the hunter ring and will be pointing Yolo, her grand prix mount, toward the inaugural Great American $1 Million Grand Prix at the conclusion of the winter circuit.

Doug Russell of Ocala, Florida set the courses for the Devoucoux Hunter Prix in the Outside Course at HITS Ocala, which was a traditional concept of hunter courses introduced last year at all HITS Horse Shows to rave reviews. “He [Bellini] loves the banks in that ring and he is really good at them,” said Holloway of her gelding’s performance on the terrain inside the innovative ring.

Riding to an 87 in the first round, Donald Sheehan of Merryville, Tennessee picked up an 84 in the second round to finish behind Holloway with a final score of 171. He collected the red ribbon in the irons of Elizabeth McKim’s Quintessential. Greg Prince of Sherborn, Massachusetts was one point off Holloway in the second round with an 85, and combined that with an 84 to finish third aboard Linda Langmeier’s Marschino. Their total score was 169.

Jennifer Tate of Bourne, Massachusetts swept the rest of the top five, riding to fourth on Florestan and fifth on Cavallino, both owned by Barbara Kravetz. Her fourth-place finish was with a 166.5 and fifth posted a 166.

Devoucoux Hunter competition continues throughout the duration of the HITS Ocala Winter Circuit as the race to qualify for the Diamond Mills Hunter Prix Final heats up.

About Devoucoux
Devoucoux, makers of fine French saddles, is proud to be the title sponsor of each and every qualifying Hunter Prix leading up to the phenomenal Diamond Mills $500,000 Hunter Prix Final. Devoucoux offers a wide range of saddles in many colors and sizes and matching accessories. Devoucoux craftsmen are devoted to creating beautiful products that reflect their obsession with quality and lovingly finished work. For more information on Devoucoux, visit devoucoux.com.

$1,500 Platinum Performance Hunter Prix
Now boasting a new title sponsor, the first qualifier for the Platinum Performance $250,000 Hunter Prix Final qualifier took the main stage at HITS Ocala on Sunday and crowned Haleigh Landrigan of Marshfield, Massachusetts the winner. She rode Acavibo, owned by Nancy Vinal. Leading both rounds by considerable margins, Landrigan posted a final score of 165 after earning and 84 and an 81, respectively.

In second, Kylie Harvil of Orlando, Florida rode her own Something To Be Proud Of to a 73 and a 72 for a final total of 145. Capping the top three was Jennifer Jones and Linda LaLonde’s September. Their 69 and 71 delivered them a final score of 140.

Larsen Muruin of Ocala, Florida finished fourth in the irons of self-owned Derby after earning scores of 71 and 67.5. Samantha Kramig of Castle Rock, Colorado rounded out the top five on Kramig, LLC’s Snuggle Zocks with scores of 70 and 68.

$1,500 Platinum Performance Hunter Prix qualifiers will be offered weekly coast to coast this winter and throughout the Saugerties and Culpeper summer circuits before the final returns to the HITS Championship this fall and offers junior and amateur hunter riders the opportunity to show for exciting prize money over thrilling courses.