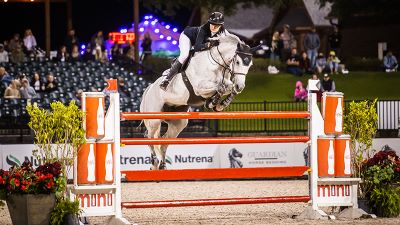 Holloway and Pepita Con Spita, the 2011 Westphalian mare (Con Spirit x Come On) owned by Hays Investment Corp., challenged five other horse and rider pairs in the jump-off phase of competition over the Michel Vaillancourt (CAN) designed course. Their show-stopping performance led them to the top spot on the podium one week after earning their first Grand Prix win together during the Tryon Fall Series. Last weekend, the duo claimed first place in the $73,000 JTWG, Inc. Grand Prix CSI 2*, her second consecutive of three Grand Prix titles in 2021 at TIEC.

“She just keeps on winning! What can I say? She’s an amazing mare. The team behind her is awesome; they come out and give it their all every time, and so does she,” said Holloway.

With only six out of 33 horse and rider pairs qualifying for the jump-off round, Holloway knew the pressure was on. “She’s pretty tried and true at this point, so I know I can give it my all.” Her goal in the jump-off phase of competition was to have a clean round with enough speed to set the tone for the other competitors. “She’s a quick horse naturally, so I wanted to put a little pressure on the other guys,” explained Holloway.

Holloway plans to give Pepita Con Spita a week off prior to the Washington International Horse Show at TIEC. She plans to continue her winning streak after her mare has a well-deserved week off. “Hopefully we will try and qualify for the world cup finals!”

Holloway reflected on her success so far in the Tryon Fall Series at TIEC. “We love it here; we just keep coming back. I couldn’t be happier!” She added, “Every time we come, we enjoy it and have a good time. The kids love it, the clients love it, and it suits everyone.”