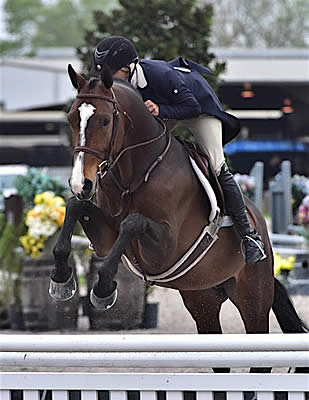 Holly Shepherd of Grand Bay, Alabama, who Week II earned the top three ribbons in the Gulf Coast Winter Classic Circuit’s $10,000 USHJA International Hunter Derby, proved herself again to be the ‘Derby Queen’ of the Gulf Coast after she led both the Classic and Handy Rounds in the irons of Sabina Holtzman’s Re Chiste. The pair earned a first round score of 88 and a Handy score of 89 for a total of 177 which awarded them a first place ribbon.

Kathleen Caya of Oconomowo, Wisconsin, in the irons of Andy Kocher’s Icali, earned a fourth place ribbon after earning a Classic round score of 83 and a Handy score of 81.5 for a total of 164.5.

Cathleen Driscoll of Elk Mills, Maryland rode her own Good Times to a ninth place finish after earning a first round score of 80 and a second round score of 74 for a combined total of 154. Hydinger returned for a tenth place ribbon, this time in the irons of her own Motivation, and Shepherd returned for eleventh place in the irons of Helen Gilbert’s White Lightening. Williams and Ramble On Farm’s Casan wrapped up the class in twelfth place.

The two weekly $1,000.00 Pre-Green Hunter Divisions, offered for only $5.00 per horse, continued to see big numbers Week VI.  Twenty-one horse and rider teams competed for the championship in the 3′ Division which welcomed Miki Moto, owned and ridden by Jennifer Jones of Ocala, Florida, to the winner’s circle. Reserve Champion honors went to Mindy Wurzburg, LLC’s Shipshape, ridden by Tim Maddrix of Leeds, Alabama.

The $1,000 3’ Pre-Green Division awarded Rio Vista Farm’s Casswell, ridden by Jordan Gilchrist of Flower Mound, Texas, the Championship, and Reserve Champion honors went to Zorro, owned and ridden by Kathleen Caya of Oconomowo, Wisconsin.  That was a $5.00 Division fee worth spending!

“We are very happy that riders and owners took advantage of this special $5 Division offering at our Gulf Coast Winter Classic Circuit in Pensacola and here in Gulfport,” commented Bob Bell, President of the Gulf Coast Winter Classic. “In view of the popularity of this offering we are delighted to be offering the weekly $1,000 Pre-Green Divisions for only $5.00 per horse at the inaugural Jacksonville Spring Classics this April,” he said.

Next week the Atlanta Spring Classic gallops onto the historic Georgia International Horse Park for two weeks of AA competition and more than $200,000 up for grabs! It’s not too late to reserve a stall. Email Jonathan@classiccompany.com and then enter online for no additional fees at horseshowsonline.com.