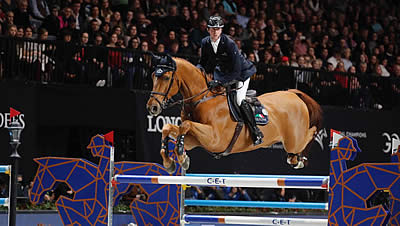 Hosted in the historic Czech capital Prague, also known as “the city of spires”, the awe-inspiring championship format saw top competition over four days in the O2 Arena with over 14,000 spectators. From dramatic entrances to dazzling pyrotechnic shows and top entertainment, the Global Champions Prague Playoffs was one of the year’s most thrilling equestrian events.

With a €6.4 million purse on the line, the GCL Super Cup was an intense battle for the top spot on the leaderboard. At the end of the four rounds of action, it was the Shanghai Swans who delivered stand-out performances to walk away with the lion’s share. The winning team was made up by Sweden’s Peder Fredricson on H&M Christian K, Germany’s Daniel Deusser on Jasmien vd Bisschop, and Switzerland’s Pius Schwizer on Cortney Cox. The full roster of the Shanghai Swans team included Shane Sweetnam, Kim Emmen, and Alexandra Thornton.

“The pressure was on and it was really exciting competition,” Fredricson said. “It was three riders on each team with no drop score – so much could happen. The best horses are here with the best riders, and it was two big courses. It was hard work but we’re finally in the spot we wanted. I didn’t believe it!”

Don’t miss the exciting action of the GCL Super Cup and find out how the other top teams including the Paris Panthers, Cannes Stars, Madrid in Motion, and Monaco Aces performed at the penultimate conclusion of the tour’s season.

Following the highlights from the GCL Super Cup and kicking off at 8:30 p.m. EST on Saturday will be the epic individual finale, the €1.25 million LGCT Super Grand Prix. The competitors earned an invitation to compete in the class in Prague if they won one of the grand prix events earlier in the series or they had the chance to qualify by placing second or third in grand prix events throughout the year. The pressure was on during the LGCT Super Grand Prix as 18 world-class combinations navigated two rounds of a challenging course with the results still up for grabs until the last rider cleared the final fence.

It was Great Britain’s Ben Maher who proved to be unstoppable once again with his talented stallion, Explosion W. The pair won the league’s overall championship last year after solidifying the win in the LGCT Grand Prix of Doha CSI5* and they have continued to dominate the series winning the overall 2019 LGCT championship for a second consecutive year after their stand out performance at the LGCT Grand Prix of New York CSI5* in September.

“[It was] amazing sport with top horses and riders in the world,” Maher said. “It is an amazing feeling to be able to win here with this horse and the people who are around me to make this possible. [He’s] magic. No words can explain him – what he has done over the past two years and how he has learned. He proved how good he is tonight.”

Joining Maher on the podium was Ireland’s Darragh Kenny on Balou du Reventon in second place while Martin Fuchs of Switzerland rode Clooney 51 into third.

If you missed any of the action from Prague or just want to relive the spectacular performances, join H&C TV to watch the exciting highlights!