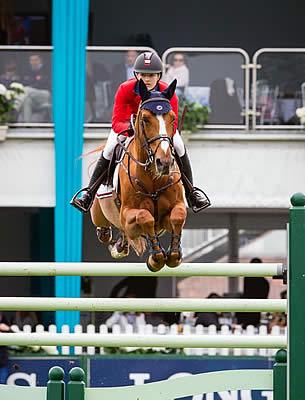 La Baule, France – The Hermès U.S. Show Jumping Team took the Silver medal in the Furusiyya FEI Nations Cup at CSIO5* La Baule in France on Friday. Led by Chef d’Equipe Robert Ridland, the team of Lucy Davis, Margie Engle, Lauren Hough, and Todd Minikus put in solid rounds to finish on four faults. This performance sets an excellent tone for the summer as the event served as the first of four observation events for members of the Short List for the 2016 U.S. Olympic Show Jumping Team, as part of the selection process for the Team. The field of eight nations was stacked with some of the world’s top talent, producing a close competition to the very end. The Netherlands topped the leaderboard on one fault and the home country of France came in third on five faults.

“It definitely went well today; we beat some really good teams. Going head-to-head with the best in the world is why we are here,” said Ridland. “To come out with four clear rounds right off the bat was impressive. It was a great effort. The course was not tricky or highly technical, but it wasn’t easy. This is a wonderful show with a great crowd; it was great to be back here at one of the best shows in the world.”

The Americans had a foot-perfect round one, with the first three combinations, Hough (Wellington, Fla.) and The Ohlala Group’s Ohlala, Davis (Los Angeles, Calif.) and Old Oak Farm Inc.’s Barron, and Engle (Wellington, Fla.) and Elm Rock Partners, LLC’s Royce, all turning in clear rounds. These performances put the U.S. forward to round two in a four-way tie for the lead on zero faults. Anchor combination, Minikus (Loxahatchee, Fla.) and Jack Snyder and Two Swans Farm’s Babalou 41, put in a round one performance in an effort to qualify for Sunday’s Grand Prix. The pair also produced a clear round, giving the U.S. the only clean sheet in round one.

Round two did not start as smoothly as round one, with lead combination Hough and Ohlala pulling three rails. Davis and Barron got the U.S. back on track with a second clear round that was followed by another double-clear effort from Engle and Royce. When the order got down to the final combinations for each nation, the competition was extremely tight. The U.S. and The Netherlands were on zero faults, followed closely by Switzerland and Great Britain on four faults. Going before the U.S. in the order, Switzerland’s anchor rider had the last fence down to add four faults to their score, and the Dutch came home with one time fault. The pressure was on Minikus and Babalou 41 as they entered the arena. The pair had a solid round over the wet ground, but an unfortunate rail at fence four meant it would be the Silver medal for the U.S.

“They all handled the pressure great,” said Ridland of his team in round two. “That part of it is the fun part, and they certainly all buckled down. Margie and Lucy were able to duplicate their clear round one efforts and we were more than in the game when Todd went in. It was ours to win, and Todd came really close; the horse had a little slip in the turn and then the rail down, but that’s show jumping. With so many great teams here, we are pretty pleased with today.”

“The course was straight forward, and we had a lot of clears in first round,” said Engle. “I was really pleased with how Royce jumped as he is fresh off a break. It did take him a little bit to get used to the footing because it was soft, but he handled it well. They raised the jumps a bit in round two, and he felt even better. He held his composure and kept his energy level up which was nice – he was super. The whole team here felt really positive; everyone has been in good spirits.”

This Nations Cup competition marked the fourth of the year for the U.S., having showcased great results in Furusiyya FEI Nations Cup events at Ocala and Coapexpan, where they placed first and second, respectively. The U.S. also finished second at the FEI Nations Cup in Wellington.

“The year is young, but so far we are having a really good year,” said Ridland. “We have competed in four Nations Cups with 16 different horses, that shows incredible depth in both the riders and horses we have.”