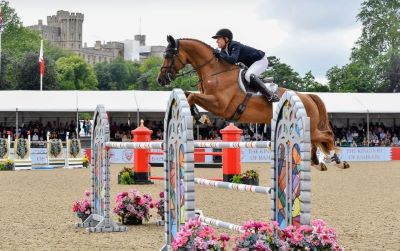 The action on day three of Royal Windsor Horse Show came thick and fast, opening with the Land Rover Services Team Jumping in the Castle Arena. Traditionally split into Military Working Horses and Non-Military Riding Horses, The King’s Troop Royal Horse Artillery D, with a team made up of SSgt Shaun Kershaw, LBdr Tara Kelly, and Sgt Hiliary Oldfield, took the Challenge Cup for the former. In the latter, Army Blenheim, comprising Capt Mary Pearson, Lt Fiona Denton, and Capt Zoe Andrew, claimed The Queen’s Plate. Both teams and the individual winner, FAC Amy Pritchard from Royal Air Force 1, had the honour of receiving their prizes from Her Majesty The Queen.

Her Majesty The Queen also presented the award for The Household Cavalry Best Turned Out Trooper supported by RBO Gold, with Trooper Gemma Dickinson from the Blues and Royals Squadron receiving The Princess Elizabeth Challenge Cup.

Over in the Frogmore Arena, the Inter Schools Show Jumping Competition supported by Martin Collins Enterprises was won by Hurstpierpoint College. Overjoyed with the win, team member Harry Wilkins said: “The competition was a lot of fun, and in the end it felt quite easy! It’s my first time competing at Royal Windsor Horse Show – the atmosphere and the experience has been amazing, and I love competing near the Castle. My favourite memory from today was winning the Inter Schools with my teammates, Harry Wilkins, Antonia Wade, and Scarlett Chatterton-Sim, and also watching the 5* show jumping.”

Holly Smith’s striking chestnut gelding Fruselli made it two from two taking the CSI5* Falcon Stakes in style, on the back of an impressive win in the Pearl Stakes. The 1.50m class was run over two rounds, with the top 10 riders from round one going through to a jump-off against the clock. As second to go in the jump-off, Jack Whitaker set the standard, jumping clear in a time of 38.99 seconds; however, it was Jessica Springsteen who was the first to pull out all the stops to take the lead in an impressive 36.09 seconds.

Springsteen’s lead was short-lived as following her into the famous Castle Arena was Britain’s Holly Smith – full of confidence following her Olympic selection – who shaved off valuable seconds, leaving out strides in the distances and making the tightest of turns to come home in an unbeatable time of 34.10. Israel’s Daniel Bluman put in a great effort to finish second aboard the 11-year-old gelding Colestina H, just 0.02 seconds faster than Springsteen in eventual third.

Speaking after her victory, Smith was full of praise for her horse: “Fruselli is very willing, very genuine and very forward going – he’s just a great type of guy. Once I’d done [jumps] one to two in seven strides instead of eight, I knew I was going to be able to keep galloping at the fences and keep turning and he’d be fine.” Holly continued, “It’s great to be back here at Windsor; you can tell everyone is so pleased to be here and really enjoying it; it’s such a great atmosphere.”

A top-class field contested the day’s feature class, The Kingdom of Bahrain Stakes for The King’s Cup. Six combinations went through to the jump-off, with World No. 5 Kent Farrington first to go to set the target. Riding the brilliant chestnut gelding Creedance, Farrington posted a fantastic round, making all the moves to finish in a time of 34.72. Ireland’s Daniel Coyle followed, also riding a superb round, but his time was no match to that set by Farrington. Several riders incurred penalties trying to catch the time required, including two of Britain’s upcoming Olympic team members, Ben Maher and Harry Charles. With just Laura Kraut left to go, the title was guaranteed to go to America; however, despite her best efforts, she posted a time of 37.83, finishing in third place, behind Daniel Coyle in second.

All is to play for going into the final day of Royal Windsor Horse Show following the Marathon phase of the CAIO4* Land Rover International Driving Grand Prix. Five-time Four-in-Hand Driving World Champion, the ever-consistent Boyd Exell, finished in second place, matching his result in the Dressage phase, meaning the Australian becomes the overall leader with 130.68 points. Dressage winner Dutchman Ijsbrand Chardon had a disappointing Marathon phase, finishing fifth, and drops one position on the overall leader board (133.21 points), slotting into second place behind Exell. Chardon’s fellow countryman, Koos de Ronde, triumphed and moves from fifth place overall to third, meaning he’s still in with a slim chance of being crowned champion. However, it looks as though Exell and Chardon will be battling it out for supremacy, with the 10-time Royal Windsor Horse Show title-holder knowing he can’t afford to knock down any balls if he is to guarantee an extraordinary 11th title.

Her Majesty The Queen had a great start to the third day of the Show when her home-bred former racehorse, First Receiver – a bay gelding by New Approach, and out of Her Majesty’s dam Touchline – headed a hotly contested Retraining of Racehorses class in her own back garden. The four-year-old, formerly trained by Sir Michael Stoute and now produced by the Jerram-Hunnable team, won four times – netting almost £20,000 – in his two-season Flat career, running his final race in June last year under Frankie Dettori, when finishing second to Russian Emperor at Royal Ascot. Here, he was beautifully shown in-hand by Chris Hunnable who, with wife Katie, is producing him in preparation for a new career in the showring, following in the footsteps of the great Barbers Shop, a former Royal Windsor ridden Supreme.

India Till claimed the prestigious Novice Show Pony title with her new ride, the delightful four-year-old Rotherwood Fancy That. This victory went some way to making up for the sudden recent loss of her reigning Horse of the Year Show and previous Royal Windsor Champion Show Pony, Drakemyre Puttin On The Ritz.

The Open equivalent fell to an overjoyed stand-in jockey and an equally overcome breeder. Lisha Leeman’s aptly named 128cm Kellythorpes Tiny Dancer glided to the top spot and the coveted trophy, partnered by 11-year-old Macie Donaldson, who was deputising for England team junior show jumper Cate Kerr. Although the Leeman family has had many wins at this Show, this was their first with a home-bred pony.