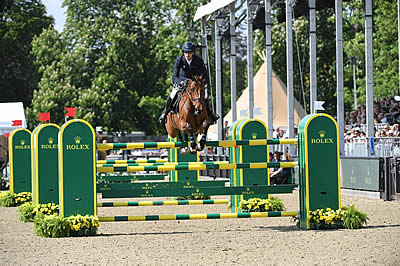 The closing day of the 76th edition of Royal Windsor Horse Show was blessed with clear blue skies and bright sun as final victories were secured for the top-class competitors.

Her Majesty The Queen was present for the Extreme Driving supported by Karen and Hugh Scott-Barrett, which premiered at the Show this year. It was Australia’s Boyd Exell, fresh from his win in the Land Rover International Driving Grand Prix, who steered his way across the finish line in the fastest time of 158.83.

The track demanded bold and precise riding from the field of 34 combinations, including 15 of the world’s top twenty riders, contesting the €500,000 prize, the richest purse ever in UK Show Jumping. The tough course reduced the sensational calibre of talent down to 12 clear combinations to progress to the jump-off.

First to go in the deciding round was British rider William Funnell, whose homebred Billy Diamo demonstrated sheer skill and bravery to keep the partnership’s cool and secure the first double clear round. The pair set the tone for the rest of the competition, having made the decision to go for precision rather than pace, in a time of 47.58 seconds.

William Funnell commented: “It is fantastic, an amazing venue; the crowd was great. It really makes you want to do well. Billy Diamo is another super horse that we have bred; we hope he will qualify for the 2020 Olympics and this year we want to make sure he qualifies for the European Championships, because he is that type of horse.”

Next to go, and also waving the British flag, was Robert Whitaker and 16-year-old Catwalk IV. Despite a strong start the pair was unable to sustain a clear round as the fast pace led to an unlucky pole down, keeping Funnell at the top of the table.

Belgian rider Gregory Wathelet (Spike Van Der Withoeve), already a winner this week and hoping to replicate his success, was the first of several combinations to incur four faults at the Rolex oxer at the last. It was Frenchman Simon Delestre (Hermes Ryan) who was able to successfully challenge Funnell and knock him into second place. Delestre’s carefully navigated turns obtained a clear round in 45.07 seconds; although not the fastest over the ground yet, he was the quickest clear and into the lead. German riders Christian Ahlmann (Take A Chance On Me Z) and Daniel Deusser (Cornet 39) were likely contenders to challenge Delestre’s time. Both competitors were a real threat against the clock; however, they finished with four and eight faults, respectively, keeping Delestre in prime position with five riders to go.

Henrik von Eckermann wasted no time in shaving time off the clock with the 13-year-old mare Toveks Mary Lou. A tight turn into the penultimate fence and speed into the last oxer shaved over two seconds off Delestre’s time to finish on 43.02 seconds and snatch first place. With two to go, including two Olympic medallists, von Eckermann had confirmed a top three position but faced the toughest competition yet, leading to a nail-biting conclusion to the Rolex Grand Prix.

Eric Lamaze, who secured his place in the jump-off with great form, would no doubt be one of the strongest contenders for pace. However, the Canadian rider had a pole down at the second and the last fence with Chacco Kid. This meant the results of the competition were in the hands of Kent Farrington (USA), a two-time winner at Royal Windsor Horse Show, and Creedance.

The former World Number One and his chestnut gelding Creedance, seemed to be the likely winners as the pair presented one of the most striking rides of the jump-off, until an unexpected error at the last resulted in four faults to confirm von Eckermann the winner.

The victorious von Eckermann said: “Mary Lou is such a fantastic horse; she is so quiet at home but when she gets to shows, she really comes to life and gets very excited. She has a fantastic mind; she always helps me and really wants to make it; that’s what makes her such a special horse. I haven’t competed here for 10 years, so it is great to be back! The crowd was amazing, and I have really enjoyed my time at this event. I definitely hope to be back next year to defend the title!”

In working hunter pony ranks — another prestigious feature of the show — the top spot went for the first time to Leyla Wheelright and her 143cm winner, Star Smokey, who jumped a superb round over a tricky course which claimed many notable scalps. This combination recently stood restricted champions at the British Show Pony Society winter championships.

The reserve award stayed in the same class, going to in-form Alice Homer, 17 — winner of the working show horse class earlier in the week — and Comberton Coda.

The final cones phase of the Land Rover International Driving Grand Prix was not without its changes of fortunes. In the Horse Four-in-Hand, serially successful Dutch driver, Ijsbrand Chardon, posted the first double clear, putting pressure on the five drivers ahead of him. In third place, his fellow countryman, Koos de Ronde, winner of the marathon, kept a cool head and collected the only other double clear to secure his position in the top three.

Lying second, expectations on Ijsbrand Chardon’s son, Bram – 2019 FEI World Cup™ Champion – were high but he unexpectedly clipped the marker to cones 19 as he made a turn earlier in the course. For this he collected 3 penalties and a 10-sec handicap which dropped him behind de Ronde.

With nine penalty points in hand, Boyd Exell from Australia drove a measured round, uncharacteristically knocking down two cones and collecting time faults. His final score, however, was sufficient to secure him his tenth title at Royal Windsor.

“It has been a hard-working few days,” Boyd remarked. “However, I’m very pleased with the new six-year-old in the team; he did all three phases, and this is only his second competition. This was his first cones course.”

The first class of the day, Pony Four-in-Hand, saw a dramatic change in the order. Lying fourth GB’s Roger Campbell delivered a double clear. The two competitors ahead of him at this time – Jaqueline Walter (GER) and Tinne Bax (BEL) – both made mistakes, dropping them behind Campbell. In first place, Jan de Boer, from the Netherlands, looking for his eighth win here, had 15+ penalties in hand at this stage. Sadly, it proved not enough and a difficult round for him and his Welsh ponies saw him drop behind Roger by less than one penalty point. This gave GB their first Pony Four-in-Hand win since 2000.

“My overwhelming emotion at the moment is surprise!” Campbell remarked. “I wouldn’t say the weekend went entirely to plan – I had a few problems in the dressage and then made some rein-handling mistakes in the marathon. Today, however, was excellent.”

This was GB’s first win in Pony Four-in-Hand for a number of years, but sadly Campbell, who is based in Germany, is unlikely to compete on home turf for the rest of the season, planning to attend events in Germany, Austria, and Czechoslovakia.

Double clear rounds eluded all Horse Pair competitors, with Germany claiming first and second place. Overnight leader, Sandro Koalick, competing here for the first time, retained his top spot with his young Dutch Warmbloods. At seven and eight years old, it is the first international season for one of them and the second for the other. His fellow countryman, 2017 winner here, Lars Schwitte, moved up to second place ahead of France’s Franck Grimonprez.

In the Nations competition, the Netherlands increased their lead to retain first place well clear of France, who moved ahead of third placed Belgium. Just three penalty points separated these two.