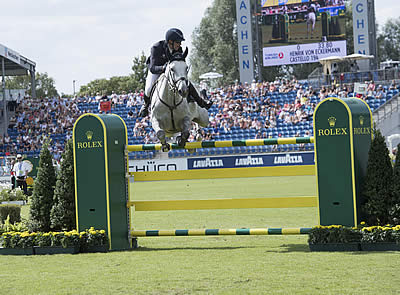 After a highly competitive jump-off, Sweden’s Henrik von Eckermann clinched the Turkish Airlines-Preis von Europa title with his grey gelding, Castello 194. He spoke after his victory:

How did the course feel today?

The course was very long; it had three combinations, one triple, one double, and of course the double plank which caused a few problems. The time was hard to keep inside of and with it being such a long course the horses were tiring at the end. I was happy with my horse’s performance and was excited to reach the jump-off.

What were your tactics going into the jump-off?

My tactics were to watch McLain’s round and work out where I could shave time off, as he is normally the one to beat in a jump-off like this. I saw a little hole where I could take him: it was the second last; he was little bit out to the oxer and I have a very scopey horse, so I thought if I stayed a little tighter to the jump, I could catch him, which we did.

How will you prepare for the Rolex Grand Prix on Sunday?

The horse will need to stay fresh and happy in the mind ahead of Sunday. It is a big wish to win the Rolex Grand Prix, but we all know how difficult the competition is. Of course, I want to chase the Rolex Grand Slam; I was second in the Geneva Grand Prix, so hopefully I can go one better this weekend.