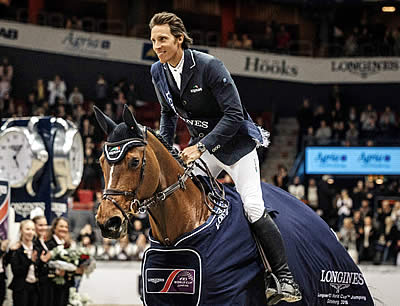 The top riders weren’t hanging about in the aftermath of the last Longines FEI World Cup™ Jumping 2018 Western European League qualifier in Gothenburg (SWE). By last Friday, just five days after Henrik von Eckermann galloped to victory for the second year running at his home event, all 18 qualified for next month’s Longines 2018 Final had already confirmed their intention to compete in Paris (FRA), along with extra athletes Edwina Tops-Alexander from Australia and Colombia’s Carlos Lopez.

The City of Lights is calling, and the world’s top contenders for the most coveted prize in indoor Jumping are answering with a great big “YES!”

Von Eckermann’s last-leg success saw him leap-frog world number four and long-time league leader Kevin Staut who enjoyed another fantastic season, competing at 12 of the 13 Western European qualifiers and booking his spot without question. The Frenchman will be joined at the Final in the AccorHotels Arena from 11 to 15 April by compatriots Simon Delestre and Roger-Yves Bost.

Only one French rider has ever held the coveted FEI World Cup™ trophy in his hands: Bruno Brouqsault sprang a big surprise when winning through in Milan (ITA) in 2004, so there is a major incentive for the host-nation representatives to bring it home once again in this 40th season.

Britain’s Michael Whitaker said in Gothenburg, “It’s about time I won it!” and he’s right about that, having come so very close on many occasions. He’s hoping to make it happen at his 23rd attempt, but Germany’s Marcus Ehning will be bidding to become the first-ever four-time champion. The wizard of warp-speed very nearly leaped to the top of the league leaderboard with by far the fastest jump-off round at the Swedish fixture, only to be denied by a late-falling pole, and is likely to put all the pressure on the rest when the Final gets underway in five weeks’ time.

Ehning’s German counterpart and the 2011 champion, Christian Ahlmann, has also easily made the cut, and a total of 10 Western European nations will be represented at this year’s Final.

America’s McLain Ward is defending champion, and there’s still a way to go before the full line-up for Paris is announced, but it’s shaping up for a mighty battle.