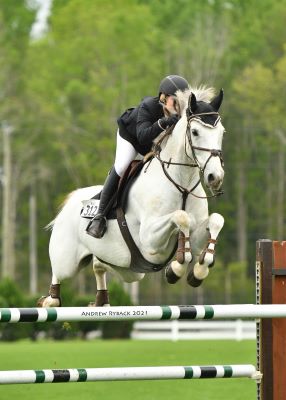 Penny Brennan of Ocala, Florida in the irons of IDK Investment Group, LLC’s Hells Angel closed out the final installment of the No Entry Fee Grand Prix, winning the $25,000 Marshall & Sterling Grand Prix, presented by EMO.

“I had so much fun!” said Brennan. “She [Hells Angel] really wanted to win today so badly,” she added.

Of those who completed the first round of the Grand Prix, seven qualified for the jump off round where the time allowed was set at 47 seconds.

Collin Reynolds of Oxford, Pennsylvania aboard his own Chicco W was the first to tackle the jump off round and turned in a clear round in a time of 34.854 seconds, setting the new time to beat.

Brennan and Hells Angel followed in the jump off order and the pair went clear, posting a time of 28.810 seconds, taking the lead. “The first round was really smooth and inviting and it was long, if anything. He [Paul Jewell] used the whole arena and used it wisely and it was meant to be for the course.”

“Folks had a little difficult time with the combination. One was on an inside turn. He made them difficult but jumpable. The last jump was challenging and was set at a seven and a half and just past the in gate and as you know, the horses lose their gear when they get to the in gate and it’s going back up the hill, so that was a little challenging for some,” she said.

“The jump off was really slick with lots of turns and little runs and it was all about ride-ability. He [Paul Jewell] made the course so your horse had to be very rideable and smooth,” she added.

Matthias Hollberg of Reddick, Florida in the irons of Jacqueline Mars’ Get Gaudi followed Brennan and Hells Angel, but twelve jump faults in a time of 33.487 seconds would see them finish in seventh place.

Brennan returned to the Grand Prix field, this time in the irons of her own Vertigo Delorme. Four jump faults in a time of 29.196 seconds finished them in sixth place. “Vertigo was great. I saw the jump from the corner and we just sliced the jump and caught the rail,” she said. “It was my fault,” she added.

Hollberg returned to the Grand Prix field, this time in the irons of Jenny Vallner’s Kilmastulla Quality Touch turning in a clear round in a time of 33.331 seconds.

Gianna Aycock of Argyle, Texas and her own Flex A Tia sat in the enviable last to go spot. Although the pair posted a time of 27.361 seconds, four jump faults would see them finish in fifth place, leaving Brennan and Hells Angel the victors.

“She’s [Hells Angel] so cute. She’s such a lady kind of like in high heels in a bikini,” Brennan laughed. “She doesn’t like any fast moves when you’re tacking her up. She is very feminine and likes to be treated as such, but she’s really very kind,” Brennan said.

“I’ve had a hell of a year. I only started showing the first two weeks of Gulfport after a brain injury last year. Then there was Covid!” said Brennan. “I only came back the first two weeks of Gulfport and returned for the final week,” she added. “I want to dedicate this win to Hilary Dunaway. She is my best friend and my guardian angel for sure.”