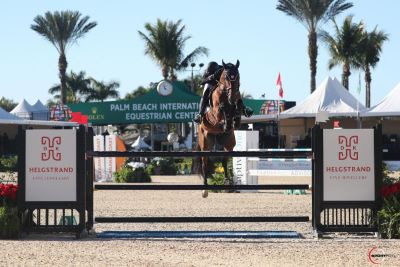 Forty-six pairs made it over Peter Grant’s (CAN) final test of the week including representatives of 13 different nations, but only seven entries advanced to the short course. The returning field was made up of riders from Ireland, Puerto Rico, Argentina, Brazil, and the United States. Gavin Harley (IRL) led off the pack with Kavalli di Magico but suffered one unfortunate rail to finish with a four-fault score for fourth place. The USA’s Heather Caristo-Williams was the first and only of the challengers to put forth a double-clean effort and still clock in at an efficient 38.32 seconds.

Ireland’s Darragh Kerins slid into the second place position with Eve Jobs’s 11-year-old Irish Sport horse gelding Intuitive (Beach Ball x Sandiamo) after beating Caristo-Williams’ time by over a second but faulting a single fence in the process. Thomas Yofre put Argentina on the podium as he and the Stellium Sport Horses LLC’s 12-year-old Holsteiner mare Cardora (Caretino 2 x Clearway) delivered the second fastest time of the jump-off class but also with a downed rail to earn third place.

Just shy of 50 combinations set out to contest the track in the final four-star event of the week on a brisk south Florida morning with 12 of those entries proving good enough to earn themselves a spot in the jump-off. The short track was filled with some of the sport’s best, including McLain Ward, Laura Kraut, and Nicola Philippaerts.

Mark McAuley (IRL), who secured the second place position in the previous night’s $216,000 NetJets Grand Prix CSI4*, looked like he would be the class victor until Olympian Nicola Philippaerts (BEL) managed to shave just under a second off of his time. Philippaerts’s time would hold until Irishman Jordan Coyle contested the course with the Elan Farm’s 11-year-old Swedish Warmblood stallion Ariso (Casall x Contender). The pair are no strangers to the victory gallop after having won several five-star and four-star events.