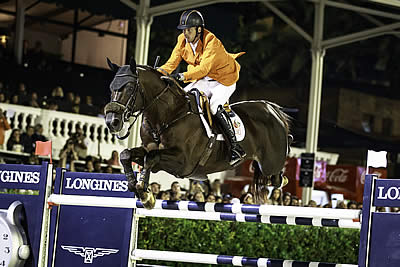 Dutch Olympian Harrie Smolders has secured the number one spot of the Longines World Ranking for the first time in his career, taking the reins from Olympic silver medallist Kent Farrington (USA) who held the position since May 2017.

Smolders, who turns 38 next week, made his Olympic debut at the 2016 Rio Games, has been snapping at the heels of Farrington (34) for several months from second position. Now at the top of this elite list on 3158 points, he earns further recognition after his incredible year in 2017 which was marked by one dominant performance after another. Smolders took individual silver with Don VHP Z at the 2017 Longines FEI European Championships in Gothenburg, and shortly after clinched victory for his country at the 2017 Longines FEI Jumping Nations Cup™ Final in Barcelona (ESP).

Kent Farrington (USA) who is well on the road to recovery after breaking his right leg in a fall in mid-February now sits in second position on 2913 points, followed closely by Peder Fredricson (SWE) who remains at number three on 2821 points.

After her electrifying win at the Longines FEI World Cup™ Jumping final in Paris in April, Beezie Madden (USA) has moved up from number 21 to 11, with Germany’s Daniel Deusser leaping back into the top ten from 17th position.

Harrie began riding at age eight, but was not initially keen on equestrian jumping. He won dressage and eventing competitions at the start of his career, and at age 16 he chose jumping over football.

Making his international début in 2000, Smolders has been part of the Netherlands Team at four FEI European Championships taking team bronze in 2001 Gijon (ESP) and individual silver in 2017 Gothenburg (SWE). He has competed at five FEI World Cup™ Jumping finals securing the silver medal in Gothenburg (SWE) in 2016. He also competed at the FEI World Equestrian Games™ in Lexington 2010 and will be looking to make his mark at the FEI World Equestrian Games™ Tryon 2018 in September.