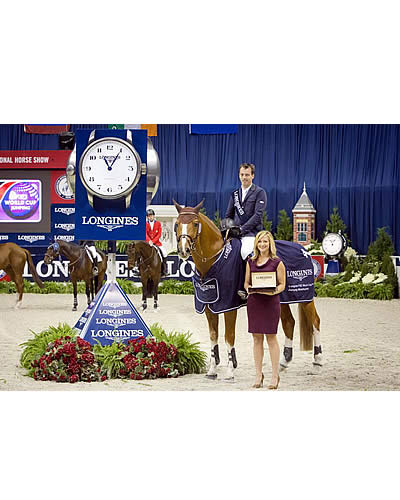 Washington DC (USA), 25 October 2015 – The Netherlands’ Harrie Smolders expertly navigated two challenging courses to win the $125,000 Longines FEI World Cup™ Jumping Qualifier at the CSI4* Washington International Horse Show. In his third visit to the historic competition, the Dutch rider etched his name into the President’s Cup for a second time, having won the headlining class in 2006.

“This show suits me,” Smolders said. “I don’t know why, but the results are always good. And for our stable, it’s been very successful this week. My student Jos Verlooy (BEL) was fourth in tonight’s class and won the Puissance on Friday night, and is the leading rider of the show. It’s a bit busy with the classes going on and telling my students all the information that I know, but it really worked out.”

Smolders drew the final position in tonight’s order of go, which allowed him the advantage of basing his strategy on the others’ performances. Only one other rider, Callan Solem (USA), rode double clear in the jump off of six horse-and-rider pairs, directly before Smolders’ turn.

“I didn’t see many go in the jump off, but I heard the results, of course,” Smolders said. “So then there was no one clear until Callan put some pressure on because she had a fantastic round. She wasn’t super fast, but she put the pressure on. I was quite pleased that she was clear because that meant I had to go. I had to decide. There was no other option.”

At the beginning of his final round, Smolders lost valuable time when his mount Emerald (Diamant de Semilly x Carthago) slipped in an early turn, forcing the rider to add an extra stride.

“I knew I was getting close so I tried to make the turn to the last two fences quite short,” Smolders said. “I knew I was close. To be honest, I didn’t know if it was enough.”

But luckily for the Dutch rider, it was just enough, winning the class by 11-hundredths of a second.

“I must say Callan did a super round,” Smolders said. “She put some pressure on. I was also pleased because I knew what to do. Otherwise, if there’s no one clear, you have to decide what to do, but now I had no choice but to go.”

The course designed by Anthony D’Ambrosio (USA) challenged the 28 riders by utilizing the long and narrow arena.

“There’s not an abundance of space, and the ring is quite narrow in relation to its length,” said D’Ambrosio, who also happens to hold the show’s Puissance record that he set in 1983. “It’s a particular type of ring, and it’s a little bit of a puzzle to get a World Cup Qualifier course in there. But for the most part, things ride fairly smooth, and we’ve had some nice competitions. I would say that it keeps me on my toes. I think it keeps the riders on their toes as well.”

Nonetheless, D’Ambrosio had predicted ahead of the class’s start that six would ride clear and into the jump off, which ultimately proved to be accurate.

“The first course was quite tough,” Smolders said. “When I walked it, I thought it was not too big, but my horse is quite scopey. The ring is quite long but not so wide, and the fences down the sides and right off the rail were quite tough for the horses.”

D’Ambrosio purposefully set a demanding course to ensure that the right horse-and-rider combinations would earn the valuable points toward qualifying for the culminating event in the spring.

“I strive to design a course that rewards the riders who are capable of going to the World Cup Final,” D’Ambrosio said. “World Cup Qualifiers have to have a standard that is somewhat similar in consistency. It’s to prepare the horses and riders to have the accuracy to jump the dimensions. That’s an important part of my job.”

Solem gave some credit for her final round to fellow competitor McLain Ward (USA) who inspired her to ride for the first double clear in the jump off.

“I was fortunate to have the counsel of McLain,” Solem said. “And he said, ‘Callan you have to try to win. Harrie’s going to be so fast. You have to do it.’ He encouraged me to do four in the first line, and he said, ‘You’re third a lot; try to win this class.’ I really appreciated that encouragement. Going to these shows on my own, trying to find my way a little bit, and producing the horses; I’m always trying to leave them better than I found them and sometimes it’s nice for me to have a little push to say, ‘Come on, you’re good enough; go ahead and try.’ I appreciate that.”

Smolders has had the ride on his flashy, 11-year-old, chestnut stallion for the past five years.

“I had him as a 6-year-old,” Smolders said. “He was always an amazing talent with great scope, technique, and rideability, but I must say this year is his biggest breakthrough. He’s very consistent in the big classes, the World Cup Qualifiers. Now that he’s 11, I feel that he has the experience in his body, and is physically able to compete at the highest level.”

The next stop for horse-and-rider team is the National Horse Show in Lexington, Ky. for their second Longines FEI World Cup™ Jumping North American League qualifier. Then Emerald will fly back to Europe, where he’s scheduled to compete in the World Cup qualifier in Madrid in November. Smolders hopes to qualify Emerald for the Longines FEI World Cup™ Jumping Final in Gothenburg (SWE) in March.

“He’s a very spectacular horse,” Smolders said. “He’s a bit of a stallion, a bit of a character, but his talent and technique are endless. When people see him once, they normally never forget him.”

“I’m very lucky to have him and every day that I ride him is such a pleasure,” Solem said. “He loves this sport so much. He’s taken to whinnying at the in gate before he goes. He really likes to do it. He had a rough start when he came as a seven-year-old. He was riddled with this and that and he didn’t really do much for the first three years. So even though he’s 12, he’s more like a ten-year-old. He’s just getting fit and strong and ready to peak in this next year, I hope.”

“I am also going to do Kentucky next week and hopefully Toronto after that and those couple of last World Cups in Florida,” she continued. “I didn’t do the first two [World Cup qualifiers]. I had gone to Europe this summer so I thought the horses should have a little break and freshen up for the fall, so I’m a little bit behind. But if we keep doing a good job, hopefully we’ll be at the Final.”

Five nations were represented in the class: Belgium (four riders), Columbia (one rider), Ireland (three riders), the Netherlands (one rider), and the United States (nineteen riders).

Victoria Lowell, WIHS President: “I think it’s super important for us to be a part of the League. Washington has such a huge history in the sport and been a World Cup qualifier for a number of years and with the League consolidating this year, it was super important to us to maintain that status. We couldn’t be happier to be part of the Longines World Cup™ Jumping North American League.”

Harrie Smolders (NED): “I think the first time I was here was ten years ago. Then I also won the grand prix and World Cup qualifier so I’m very pleased to be back and to do it all over again.”

“Emerald has always been a fantastic horse with a lot of talent. But I think this year he has made his breakthrough. He was very consistent this year and he did Nations Cup shows, we were also fifth for the Europeans. He has talent; he’s more mature, now it also shows in his results that he’s in the best of his life, I think. He has now the experience and now it’s time to win something.”

“I don’t think it really matters whether it’s indoors or outdoors for Emerald. He’s good in the big fields also, and he was very good this year.”

Callan Solem (USA): “With the slimmed down League, there aren’t as many World Cup qualifiers this year so each one is even more important. And with these guys coming from overseas, it made it certainly a diverse group. We don’t compete against them week in and week out like we do with other Americans. So it’s definitely nice to get beat by somebody different.”

Nicola Philippaerts (BEL): “I think it’s now my fourth time to come here and we’re always pleased to come back here. We always do the three tours – here, Lexington, and Toronto. For us, it’s quite nice if we can get some points here before we go back to Europe.”

“I’ve had him [H&M Forever D Arco ter Linden] since he was six years old; we bought him in Belgium from the breeder. He’s ten years old now, and he’s always been a good horse just always a bit strong and quite hot. And now through the years, he gets better and better. He did a few good results this year, and I’m happy with today.”

Anthony D’Ambrosio (USA): I think that the field was strong this year. This was my third visit here to course design in the last four years, and I’ve watched the field of horses and riders steadily strengthen through the year. The riders are liking the competition, and I thought they did a great job. Congratulations to all of you. I thought it was not an easy course. For me, it was very entertaining, and I think the crowd would agree. I think it was a very good competition.”

Established in 1958, the Washington International Horse Show is one of the most prestigious equestrian sporting events in the U.S. More than 26,000 spectators attend the six-day show, which includes Olympic-level competition along with community and charity events. More than 500 top horses and riders come to D.C. from all over the globe to jump for more than a half a million dollars in prize money. Event highlights include the $125,000 Longines FEI World Cup Jumping Washington, presented by Events DC, for the President’s Cup (Saturday night), The Boeing Company Puissance high jump competition on Military Night (Friday) and Kids’ Day (Saturday), a free, fun and educational community event. The Washington International Horse Show Association, Ltd. is a 501(c)(3) nonprofit charitable organization headquartered in Washington, D.C. WIHS is an official USEF Heritage Competition and is recognized as a Top 25 Horse Show by the North American Riders Group. WIHS is rated CSI4*-W by the Fédération Equestre Internationale, the world governing body for horse sports.

The new league was launched by Beezie Madden, the most decorated US female equestrian athlete of all time, American Gold Cup winner and FEI Solidarity Ambassador Jessica Springsteen, and Hannah Selleck, team and individual gold medalist at young rider level and one of the sport’s up-and-coming stars. The full launch release is available here: https://goo.gl/kCIsyW.