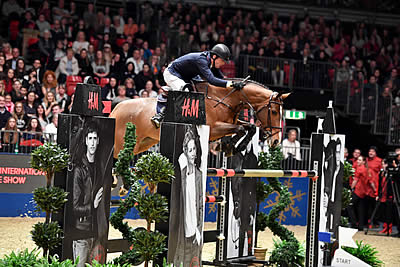 H&M day at Olympia, The London International Horse Show, will be memorable as a great day for British Show Jumping, but the very last class fell to a Dutch rider, Harrie Smolders, who proved that the patient approach can win the day when capturing the H&M Ivy Stakes.

Madison Heath made the most of her last ride on Red Alert III by taking the H&M Mistletoe Stakes for 128cm ponies with a superbly fast and thrilling round.

The seasoned mare has already been sold to international show jumper Geoff Luckett for his children. “We have had her for five years, with my sister Bobbie riding her before me,” said Cheshire-based Madison. “She has never let us down.”

International rider Laura Renwick was watching and praised the youngster. “I have ridden with Madison in relays before and she’s very competitive,” said Laura. “Today she rode with maturity, used her head, and was absolutely spot on.”

Ponies took to the stage earlier in the day, too, in the H&M Pony Club Mini-Major, a relay class in which international riders are paired up with their under-12 counterparts.

“It’s the first time I have been to Olympia and it’s absolutely amazing,” said Annie, who lives near Belfast. “Anna told me to go in and just have fun, which is what I wanted to do, and, once I was in there, I just went for it.”

Harrie Smolders was a member of the Netherlands team at the Rio Olympic Games, but this was his first Olympia win. When his four rivals in the jump-off all faulted, a steady clear was all that was required to lift first prize. “My horse is not so fast, so it was the only way to win!” he joked.

He has only been riding his winning mount, the nine-year-old mare Corrada, for two months. “This was a nice competition to win with a new horse – I’ve only had her for two months,” he explained. “She is quite green but a horse can learn a lot here and she is very calm.”

Swedish rider Malin Baryard-Johnsson continues to head the H&M leading Rider of the Show table by 17 points from the crowd-pleasing Italian rider Lorenzo De Luca. Ben Maher and Laura Renwick are third and fourth for Britain.