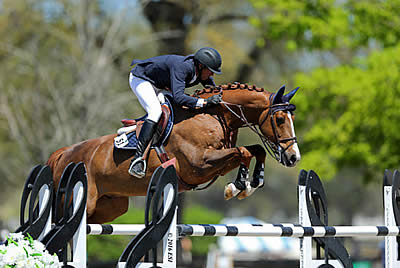 Culpeper, VA (April 26, 2016): One Grand Prix victory was not enough for Southern Pines, North Carolina equestrian Harold Chopping in the first week of the HITS Culpeper Show Series. Coming off a hot streak with a first and second place finish in the $25,000 Brook Ledge Grand Prix on Friday, as well as a win in the $5,000 Devoucoux Hunter Prix on Saturday, Chopping closed out the weekend in style by taking home the $30,000 HITS Grand Prix title.

Eight returned to the jump-off to contest the shortened course set by Marina Azevedo of Brazil, where five would go clear. First to challenge the course were the victors themselves, Chopping and Basje, owned by Kendra Bullington.

“On Friday, Basje and I were lucky enough to be last to go in the jump-off, so I knew what I had to do,” said Chopping of his winning ride in the $25,000 Brook Ledge Grand Prix. “This time, we were on the opposite end of things, going first in the first round and in the jump-off.”

They blazed through the course, putting in a speedy round to set the tone for the remaining field as they crossed the timers fault-free in 36.146.

“I pushed him a little bit in the jump-off and tried to lay down a round that was hard to beat,” said Chopping. “I thought he responded beautifully and jumped a great round. I’m just sort of lucky to hang on.”

Sure enough, Chopping and Basje did indeed lay down an unbeatable round as they stayed put at the top of the leaderboard for the remainder of the class.

Following Chopping was Debbie McCarthy Connor of Patterson, New York and Zim, owned by Connor & Ebetino Jumpers, LLC. They too put down a clear round, but clocked in at 46.021 which would ultimately earn them fifth place.

Matthias Hollberg of Middleburg, Virginia returned next aboard Aletta, owned by Olympic Dreams, LLC. Hollberg and Aletta took to the course with precision and speed, but their time of 38.799 was not enough to edge out Chopping. When the class was finished, they would take home fourth.

Next of the clear jump-off rounds was Alison Robitaille of Upperville, Virginia, piloting Sensation 21, owned by Hooves, LLC. They were not quite quick enough to take over the lead, but their clean round in 38.535 was enough to edge out Hollberg, eventually earning them the third place prize.

Victoria, British Columbia rider Ali Ramsay and her own Hermelien VD Hooghoeve were the final trip with the opportunity to claim the win. Ramsay came in third to Chopping in Friday’s Brook Ledge Grand Prix and the crowd was anticipating another head-to-head battle for the blue.

Ramsay galloped through the course no holds barred in a thrilling race against the clock. A victory seemed on the horizon, but a time of 37.914 kept them one second shy of the win.