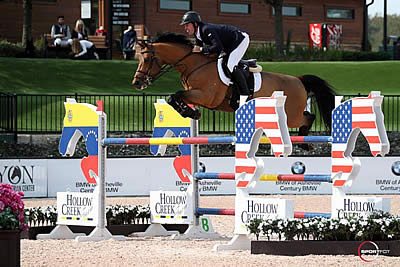 Mill Spring, NC – October 27, 2016 – The $35,000 1.50m Suncast® Welcome CSI 3* at Tryon International Equestrian Center (TIEC) saw Hardin Towell (USA) and New York claim top honors in the second FEI class of the week during Tryon Fall VI. The duo earned the win with a jump-off time of 35.298 seconds ahead of Sharn Wordley (NZL) and Casper who completed the second round track in 37.627 seconds. Tracy Fenney (USA) and MTM Reve Du Paradis rounded out the top three finishers, crossing through the timers in 37.764 seconds.

Towell and New York, a 2006 Dutch Warmblood gelding (Verdi x Watzmann) owned by Jennifer Gates LLC, earned an early trip to the jump-off round after securing a double clear effort around the first track set by Guilherme Jorge (BRA). The pair was the first to go in the second round and maintained their lead throughout the nine horse jump-off.

“When I walked the course I thought that it would ride very nice. I thought [Gui] did a great job, as always,” commented Towell. “This horse has not shown a lot in the past few weeks. His last big class was in Vienna and then we did a training show when we got back.”

New York is naturally a fast horse with careful tendencies, which Towell felt was a major determining factor in the pair’s win. He explained what makes New York such a standout member of his elite string of top mounts.

“I think more so than any other horse that we have, this horse can win any size class anywhere in the world,” he elaborated. “Anywhere from 1.40m to 1.60m this horse can be competitive. I have horses that can jump big and that are quick, but this horse can just win anything. He’s very talented that way.”

With two horses entered in FEI competition this week, Towell is hoping for strong result from New York and Emilie De Diamant A S. Towell has steadily moved up the FEI World Ranking List over the past two years and now schedules his competitions with careful consideration.

“I went quite quick today. I got a little greedy today and really wanted to win this class, but we truly came to try and get a top result on Saturday night,” he said. “I’m hoping that we can have some good finishes. I have two horses here so it’s a great opportunity.”

Currently sitting just outside of the top 40 riders in the world, coming in at 41, Towell is determined to continue rising through the ranks. He talked about his recent successes and commented on the mentality and drive he has to reach the top of the sport.

“When you’re in that top 50 it really changes everything. Two years ago, I would try to win every ranking class I could and now I have a really great string of horses and we shoot for the bigger classes. We have a great team behind us. My staff, my barn manager, and of course Jennifer [Gates] who is studying abroad right now, but watching very closely. We have a great team.”

Towell grew up only a few hours from TIEC in Camden, SC and is happy to be back, close to his family this week, a major factor in his team’s decision to compete at the venue this week.

“This is our first time at Tryon and it’s just fantastic. We’re so happy to be here and are looking forward to coming back many times in the future,” commented Towell. “I’ve wanted to come here since the facility opened and it’s nice to be here and be able to spend time with my family.”

“I had obviously heard a lot about this place, watched a lot of videos on the venue, and I have to say that I was still impressed when I pulled up. I had some high expectations and it surpassed them,” he concluded.