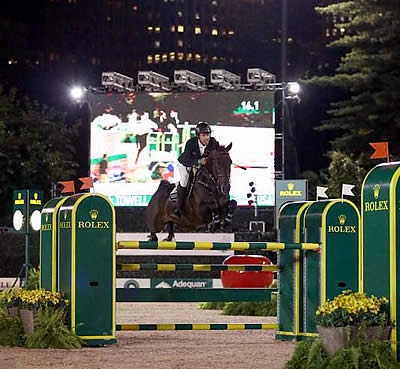 “I felt the course was nice. It had a twisty turning start, but it wasn’t so big and my horse has been jumping big classes all year,” he said. “Tonight was a very competitive class, but I had a lot of confidence in my horse, so I took some shots and it was fantastic. I felt he was pretty quick to the second to last jump, and I thought my turns were nice. Last week at Gold Cup I only got third, but I didn’t trust my horse or myself through the first line and in the second line I had the third jump down. I would’ve ended up third even if I’d gone clean, so today I decided to believe in my horse. I felt fast today and I knew it was quite good.”

Towell and Lucifer V have been partnered together for several year and amassed top finishes around the globe in international competition. The pair has excelled during the summer season and Towell felt that the size and structure of the ring helped the duo secure the win and spoke to the versatility of Lucifer V.

“He’s a very diverse horse. In big fields like Spruce Meadows, he’s also great. He doesn’t have the biggest stride, so in an arena like this it’s even better because he’s quicker in the turns, but this is quite a good ring. I’d also like to add that Daniel is one of my very close friends and we’re very competitive, so it’s always fun to win, but to beat one of your friends is even better,” laughed Towell. “I’m not going to lie, the reason I really tried was because Daniel was winning, and he’s won enough the past couple of weeks.”

Bluman is also coming off of a very successful European tour, like his friend Hardin Towell, and was pleased with Bacara D’Archonfosse and her performance, as they look towards the $216,000 Grand Prix CSI 3* presented by Rolex.

“The mare jumped really well again tonight. We’ve been jumping great the past few shows and winning some classes. I walked the course and like Hardin said it wasn’t too big,” he explained. “I got to see Kristen [Vanderveen] go after me and she had a beautiful round and was super-fast. At that point I figured Hardin would get me at the end. He’s a competitive guy. We work together and grew up together, and I knew he was going to try and he got me, so I’m happy for the second place, happy for him, and looking forward to tomorrow.”

Bluman explained that though the mare is a serious competitor in the competition arena, she’s extremely relaxed outside of the ring. He commented, “Hardin and I were joking in the warm-up that if she were a horse used for transportation two hundred years ago, it wouldn’t do. She doesn’t want to work because she’s so relaxed. It took her twice the amount of time to get from stabling to the ring than any other horse, but she goes in the ring and she knows what she has to do. She’s a competitor and she likes to win. She allows me to do my job. She’s really fantastic horse who always wants to jump clear.”

Kristen Vanderveen and Bull Run’s Faustino De Tili were incredibly close to stealing the win in Wollman Rink and used the tight course to their advantage, posting the third fastest time despite knocking the first rail at the one-stride combination.

“He is super-fast and the small ring here actually plays to his advantage because he’s really quick on the turns. I felt that we were very tight everywhere and he ended up catching me off guard by the end of the course. He was so ready for the turns that I cut him a little too aggressively at the combination and it caught up with me,” she explained. “But I was very pleased with him tonight. He’s so rideable for me. He’s listening all the time and asks where I want to go, and that really helps in a ring of this size, and with his size as well. He’s right where I want him.”

The class boasted five entries that began the competition at a wall height of 5’3″. All five entries contested a height of 6’9″, before Andrew Kocher (USA), and Paul O’Shea (IRL) were eliminated in the fourth and final round of competition.

“I started to train last year and I had an equitation horse,” smiled Godek. “I got an email asking if anyone wanted to do the Puissance at Central Park and I mean say no more! I had another client riding this horse in the 3’6″ Equitation and I knew he jumped big. I practiced a couple of times last year and we came back to win this year!”

Emanuel Andrade, a notable name on both the national and international show jumping circuits, contested his first Puissance class under the lights aboard his own Clouwni, ultimately clearing the massive wall set at 6’9″.

“This was my first Puissance and it was very exciting. It was impressive the first time I jumped that wall, but after that I started getting confident and it got much better. It was huge! I’m very happy about it,” he said. “I’m very happy about the group of horses that went this year. They were all so good.”

Veteran of the group, Todd Minikus, guided a young talent in his string in the class, also clearing the impressive wall at its top height. At only eight-years-old, VDL Excel looks to be a strong contender for the future and Minikus commented on the experience for both horse and rider under the lights in Central Park, while thanking class sponsor Spy Coast Farm for the opportunity.

“I’d like to thank Spy Coast Farm for sponsoring this. We all really appreciate it and the crowd seems to really appreciate it,” said Minikus. “I rode a young horse tonight. We just started doing some smaller grand prix and this is great for giving the horses experience under the lights.”

The revival of the Puissance in New York City was sparked by the once popular National Horse Show hosted at Madison Square Garden for many years. Mark Bellissimo, CEO of International Equestrian Group (IEG), felt it was necessary to keep the tradition alive in Central Park, once again bringing the entertaining brick wall back to the iconic city.

“The National Horse Show used to be here and no one can replace that show, but we are hoping in time we can bring that type of energy with us to the Rolex Central Park Horse Show,” he commented. “This is the opportunity to do that, so last year we decided to add the Puissance class. It’s a great thing to have in this sport. It engages the crowd and gives people something to root for that they understand. It’s simple, if you leave the wall up, you move on to the next round.”

Spy Coast Farm, a sport horse breeding and training operation based in both Lexington, KY, and Wellington, FL, was a first year sponsor of the U.S. Open $50,000 Puissance class and Lisa Lourie of Spy Coast Farm was on hand to discuss their participation in the event this year and discuss her love for Puissance, which was sparked by watching the entertaining class at the Dublin Horse Show each summer.

“I was so happy that we got this group of riders this year and we were so thrilled that they all came out. That’s what the Puissance is all about. If you don’t have good riders and good horses, then the class falls flat. We had the right group tonight, and that’s what it comes down too,” she said. “I called Mark after watching the Puissance at the Dublin Horse Show and told him that I was in for Central Park because it’s such a fantastic class.”

“I used to have parties in Wollman Rink for my birthday,” commented Gochman. “It’s amazing to see the transformation from an ice skating arena to an amazing show with a beautiful backdrop. It’s such a privilege to be able to show in the middle of New York City. Central Park has always been a fun place to hang out, but I never imagined I’d be riding in a horse show here.”

Of her round, Gochman said, “It was a nice course. It was a little complicated with the angles but our trainer really helped. She told us where to go and set us up for the best possible route, so that was very helpful. She’s a new mare for me, and we’ve had a lot of success so far. I’m really starting to figure out what she likes and doesn’t like. She’s game for anything and she always tries to jump her best. She’s just a really good mare.”

“I got this horse in the middle of July,” said Crown, “We’ve only gone to about five shows together or so. He’s incredibly competitive and he’s very good at venues like this. He’s comfortable with the tight rings. This worked out in his favor, but we still couldn’t beat Mimi. That was fast! We gave it a go and he was fantastic, so I couldn’t have asked for anything more.”

“I’ve been competing against Mimi for basically my entire life,” commented the eldest Gochman sister. “This doesn’t really change anything. I’m always rooting for her and she’s always routing for me. Tonight I was just taking one for the team. Whoever wins, it’s still good because go team Baxter Hill!”