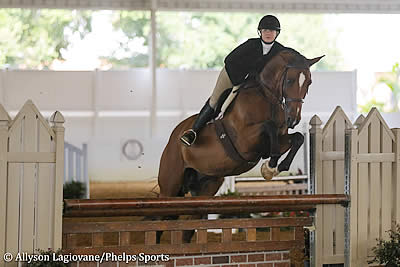 Tampa, Fla. – Sept. 1, 2018 – Horses and riders returned to the Bob Thomas Equestrian Center in Tampa, Florida for the second day of the 2018 Southeast Medal Finals. Saturday marked the first rounds of finals getting underway in all three rings. Outside of finals competition, the day also featured the crowd-favorite Equitation Team Challenge, sponsored by SmartPak, as well as the Pony Handy Hunter Classic.

The highlight event of the evening, the Equitation Team Challenge, tasked three teams of young riders to form and execute a plan around an equitation course without any help from a trainer. The composite score from each of the team’s four members would total a final score, dropping the lowest score for each team. Each individual rider had the option to jump at either the 2’6” or 3′ height, with the majority electing to tackle the higher fences.

Camryn Halley and I’ll Say JSF, members of Team 3, held the highest score for their team as well as the entire class with an 86. Also on Team 3 was Schuyler Dayner and Gambino riding to an 81, Makaylah Jones and Zeeland receiving a 73, and Emily Buda aboard By Design. After dropping the lowest score, Team 3 would ultimately come out on top with a composite score of 240 – a whopping 18 point lead over the second place team.

Earlier in the day, pony riders took to the Stampede covered arena to compete in the $500 Pony Handy Hunter Classic, sponsored by KL Select. The class was judged over only one handy round of competition, and without a classic phase to rely on, each rider needed to put their best foot forward during their only turn on course. Small, medium and large ponies and their riders all competed in the class, jumping the series of fences set at 2′, 2’6″ and 2’9″ dependent upon size.

The class winner was 12-year-old Kendall Dean and Zoolander, a large pony owned by Madison Spangle, claiming the blue with a score of 82. Finishing second to Dean was Isabel Bertelsen riding her own mount Tazmanian Devil with a score of 70. Rounding out the top three in the class was Emma Arnhols riding Cecilia Perry’s Colorful Scenario to a score of 69.