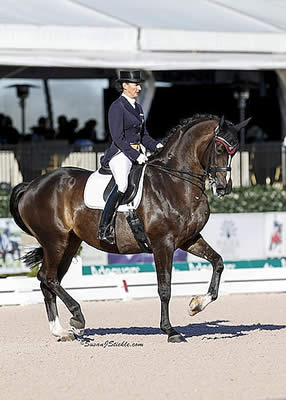 Wellington, FL – February 19, 2015 – While competition officially started on Wednesday for week 7 of the Adequan® Global Dressage Festival (AGDF), awards presentations took place today for three CDI classes. Mikala Gundersen (DEN) and My Lady topped the FEI Grand Prix CDI 4*, presented by The Dutta Corporation, with a 71.600%. Shelly Francis (USA) and Doktor placed second receiving a 71.080%, and Belinda Trussell (CAN) and Anton followed in third place scoring a 70.400%. AGDF 7 competition will continue tomorrow, highlighting the “Friday Night Stars” FEI Grand Prix Freestyles for CDI 3*/4*. Both the CDI 3* (starting at 6:15 pm) and 4* (following with first horse at 8:45 pm) Freestyle classes will be held under the lights in The Stadium Arena at Palm Beach International Equestrian Center (PBIEC) with doors opening at 6pm.

If you can’t make it to AGDF, livestreaming will be available at this link: http://bit.ly/1zrcaRN.

“I am so thrilled to have come in first place today. I had a difficult ride with the wind; it was blowing very hard during the test, and Lady is a very sensitive horse,” explained Gundersen. “It made her very tense right in front of the judges which hurt my piaffes. When she got a little bit nervous I did lose some points, but Shelly Francis and I have been so close all season and I got lucky today.”

The atmosphere was challenging for many of the pairs, as wind gusts blustered through the AGDF grounds all day. The colder temperatures and rattling flags created trouble for riders throughout the competition. “I try to keep her very busy, but I don’t want to make her tired. I want her to mentally be fresh, but not make her body tired so I did a lot of posting trot and made her really low in the neck to try to get her to relax,” commented Gundersen when describing how she keeps “Lady” calm when surroundings start to bother her.

“I had some great highlights today. All of the extensions felt great, and I think we had a lot of nice movements in the test. I can’t wait to see them on video,” she smiled. “On days like today, I have to be very soft and giving with my hands because she is such a sensitive horse. I can’t have her strong in my hand because she will take the rein and start to pull through. I’m always moving my ring finger trying to keep her supple, supple, supple.” My Lady continues to improve with each outing, and Gundersen is looking to aim her at the first CDI 5* competition in Aachen, Germany in May just before the Danish Championships and hopefully earning a spot on the European Championship Team for Denmark.

Watch the video for the winning ride of Mikala and My Lady. Video courtesy of Campfield Videos.

Shelly Francis had a great second day of competition at Week 7 of AGDF, placing near the top of the leaderboard with all three of her rides in CDI competition. “I had a very short warm-up with Doktor, but he was lit like a fire-cracker today!” she smiled. “He got a little bit tight in the rhythm in the trot work, but he was very good. The weather was very stimulating, and I’m very proud of the way all of my horses handled it, but it did keep them a little bit hotter.”

Francis has been riding Doktor for nearly six years now, and their partnership is truly starting to shine as the pair has had top place finishes at all of the CDIs they have contested this season at AGDF. “I’m going to plan on doing another World Cup qualifier and see where that gets me. I’ve done one World Cup qualifier already and I plan on doing the next CDI here at AGDF. If it gets me to the World Cup then maybe I will consider that, but my plans are really still up in the air,” commented Francis on her coming plans with the gelding.

Francis has worked diligently to fine-tune their tests and her efforts are obvious, as the duo greatly improved in specific areas that Francis focused on in the past two weeks since their last CDI competition. “I’m always working on getting everything nice and smooth. There were little moments when he would get tense in the middle of a movement, like the half-pass or the extensions. I think that was because of the wind though. I felt overall this week was smoother, and there was a better frame carriage. There are still some bobbles I would like to get rid of to make the test really smooth.”

Allison Brock (USA) and Rosevelt captured another win this season at AGDF, topping the FEI Grand Prix CDI 3* class, presented by Havensafe Farm, scoring a 71.600%. Lara Griffith (GBR) and Rubin Al Asad followed in second with a 71.020%, and Shelly Francis (USA) and Danilo came in third receiving a 69.540%.

Brock and Rosevelt added another Grand Prix victory to their string, as the pair also captured a win in the AGDF 1 FEI Grand Prix CDI-W and placed second in the FEI Grand Prix Special CDI-W the same week. “I felt in my own head a lot more confident. Once you get the first one out of the way, it is always easier. I knew he could handle the venue. I was really only concerned about how the weather would impact his ability to focus,” said Brock.

The duo will contest their first “Friday Night Stars” FEI Grand Prix Freestyle CDI3* tomorrow night under the lights, which will serve as a great learning opportunity for “Rosie.” “He’s going to have to go in there and cope with the environment, and I won’t know what I have until I get in there, but in a way today was good prep because if it is calm tomorrow night, it will feel like nothing compared to today,” she commented about Rosevelt’s hot personality. “He has to just go in and do it, and this is his year to learn how to deal with it. I don’t have expectations for tomorrow. I want him to go in feeling like he can trust me because that’s when we perform our best.”

The weather was a major factor for most riders today, especially those on sensitive horses, but Brock was pleased with the way “Rosie” handled the atmosphere and the environment considering their warm-up was more difficult than she anticipated. “The warm-up was a bit tricky for me today. The gusting winds with all of the flags flapping, it made it pretty difficult for him. I’m proud because he really went in the ring and let it go and carried on. He was really about as honest as he could have been considering the circumstance.”

Lara Griffiths and Rubin Al Asad had a wonderfully relaxed and mistake-free test to take home the second place prize in the large class. Griffiths, who competed “Rufus” at the Week 5 CDI3*, felt a drastic improvement from the pair’s tests two weeks ago. “I started riding him about four years ago, and he was coming off an injury. It’s taken a while to get his strength back, but even compared to two weeks ago he’s a completely different horse,” stated Griffiths. “That is what is great about these shows and this venue. You can keep bringing them out and showing them, and it really helps their confidence.”

Traveling to Wellington for the winter circuit with her trainer, Laura Tomlinson, has been greatly beneficial for the duo, as Griffiths plans to contest a number of CDIs in Europe after returning home to England in March. “Today was a really special day for us. It was only our second Grand Prix together, and I was pretty happy with him,” she said. “He was a little bit scared in the ring because he still is very green, but he let me really ride him and that was my main goal.”

Griffiths was pleased with the attitude “Rufus” displayed in the ring and feels that their scores will only improve as the big gelding continues to gain confidence with Griffiths in the saddle. “I wanted to get those marks to creep up and not have any mistakes, which we didn’t,” she explained. “I really couldn’t have asked more from him. The general way of going was more confident today, which is what we’ve been working on.”

The FEI Prix St. Georges CDI 1* class, presented by Mission Control for the second week at AGDF, finished this afternoon after starting Wednesday morning due to the large number of more than 40 entries. Kimberly Herslow (USA) and Rosmarin scored a 72.474% to win over the rest of the field. Dawn White-O’Connor (USA) and Aristo followed in second place with 70.184%, and Kasey Perry (USA) and Goerklintgaards Dublet finishing in third on a 69.921%.

FEI CDI 4*/3*/1* competition will continue throughout the week, with the “Friday Night Stars” FEI Grand Prix Musical Freestyle highlighting AGDF Week 7. The event will begin at 6pm with both CDI 3* and CDI 4* Grand Prix Freestyles taking place under the lights in The Stadium’s electric atmosphere. Competition will continue on Saturday and conclude on Sunday, February 22, with the FEI Intermediaire 1 Freestyle CDI 1*, presented by Mission Control.