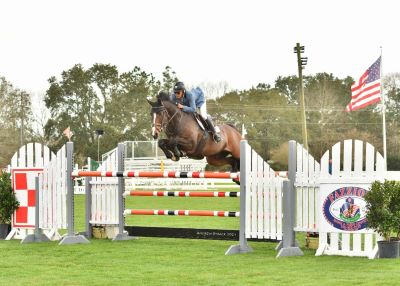 Shepherd said, “We got Krooze just before Gulfport last year and since then have shown for a total of five weeks here between last year and this year. She’s won four of the five Grand Prix we’ve entered here so far.”

First to go, Shepherd and CHS Krooze turned in a fault free jump off round in a time of 36.595 seconds. Murphy and Hyperios HS followed but earned four jump faults and finished in second place overall.

Shepherd commented, “It was a hard course today and while there weren’t any big issues, you just had to be very careful out there. There was a great field of riders and horses, but only two went clear. It felt like the course won today,” she said.

“I had to make sure I was clear today, so I played it a little safe,” continued Shepherd. “In the jump off round, I thought Brian might have had me at the third jump, but when he took the rail there, that really decided the class,” she added.

“Krooze and I are still getting to know each other,” commented Shepherd. “We got her just before Gulfport kicked off last year, but when I hurt my shoulder last year, I had to take a break in order to heal and didn’t go anywhere for a couple of months. She’s really quite complex, but is all business when she gets in the ring.

“We are quite the same in temperament, but she’s a little spicier than me,” she laughed. “She really is a horse of a lifetime and I’m so thankful to Loretta Patterson for the opportunity to ride her,” she added.

“Loretta Patterson has been with me for 22 years and is my best friend, next to my parents and my son. Her love for the horses is above and beyond and I am so lucky to have that sort of owner,” she added.

Third place was awarded to Highridge Farm, LLC’s Kaprio, ridden by Danielle Grice of Mount Pleasant, Tennessee, for their first round which they finished in 84.159 seconds which earned one time fault.

Collin Reynolds of Oxford, Pennsylvania aboard his own Chicco W finished in fourth place with their first-round time of 84.763 seconds which earned them one time fault.

Even though junior rider Bree Garey of Houston, Texas and her own Carvelo Z had no jump faults in their first round, their time of 85.467 seconds earned them two time faults and a fifth place ribbon.

Junior rider Emma Scott of Conroe, Texas and her own Vidam De Courcel placed sixth overall for their four fault first round in a time of 77.616.