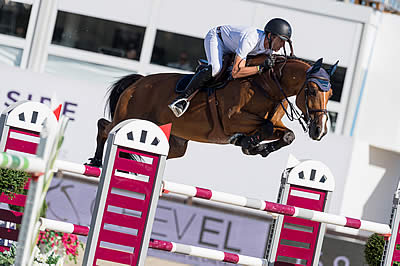 The Belgian Grégory Wathelet, reigning European team champion, wins the big event of the day of the CSI 4 * of the HUBSIDE JUMPING of Grimaud, in the saddle on the BWP Indago. In this speed test, he was more than two seconds ahead of German master Marcus Ehning, at the helm of Funky Fred, and the reigning Olympic team champion, Frenchman Philippe Rozier, third, associated with Prestigio Ls La Silla.

“On a speed course, you have to take risks from start to finish. But it was an opening event for this week: everyone wants to take the risks, without doing anything the first day. As soon as I entered the track, I felt that Indago was in good shape; he jumped well from the first obstacle; I was confident. I had planned to take a stride off number 2 and the last: it saved me a little time. Then we had to tighten the turns, stay in the gallop, and be a little shorter than the competition in two or three places. Indago is a horse who likes speed, who is respectful and at these heights, 145-150; he is very competitive. In June-July, I participated in three of the four weeks offered by HUBSIDE JUMPING. I got some rankings, but no wins. One of the explanations is simple: my best horses weren’t on the way yet. Let’s not forget that we came out of a period of several months without a competition. The horses had to be put back on levels 4 and 5*. From now on, horses are once again in the rhythm of competitions. Indago will come out on Saturday at 145; Full House will skip the Grand Prix. My championship horse, Nevados, was previously at the service. It really picks up here. He will jump tomorrow’s big event and next week’s Grand Prix.”