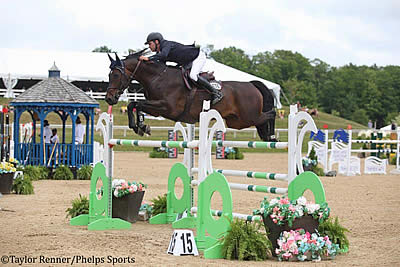 Santiago Lambre and Dingeman at GLEF in 2017.

Traverse City, Mich. – July 24, 2019 – International competition continues for the fourth week of the 2019 Great Lakes Equestrian Festival, presented by CaptiveOne Advisors, LLC, with the second FEI-rated week of the series. Week IV touts a CSI2* rating and offers a number of chances for contenders to rack up prize money earnings.

In total, 49 partnerships representing six nations will compete. Contenders hail from Israel, Ireland, Canada, Mexico, Argentina, and the home nation of the United States, which boasts the greatest number of athletes. American exhibitors will include well-known names such as Molly Ashe Cawley, Schuyler Riley, Andrew Welles, and Ali Wolff, while Tomas Yofre will compete as the only Argentinian entry and Sydney Shulman will serve as the sole Israeli flag bearer.

FEI competition begins Thursday in the Grand Prix Ring with the $1,000 1.40 Jumper CSI2*, and will resume Friday with the $35,700 Devoucoux Welcome Stake CSI2* in the afternoon. The highlight event of the week, the $71,200 Flintfields Farm Grand Prix CSI2*, will begin at 2 p.m. on Sunday.

The 2019 GLEF will feature two more weeks of internationally-ranked competition to conclude the six-week circuit. Weeks V and VI will both boast a prestigious CSI3* rating.