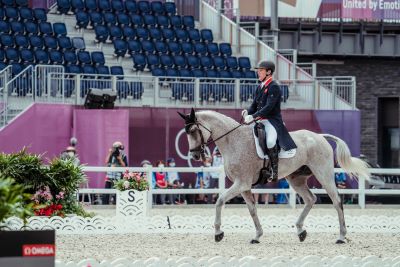 World number one, Oliver Townend, gave the British team the best possible start when taking the individual lead as the Dressage phase kicked off equestrian Eventing at the Tokyo 2020 Olympic Games in Baji Koen.

Going second in the first of the two sessions, with a further 20 horse-and-rider combinations to go, the 38-year-old athlete who is a triple European team gold medallist, produced what he described as “a very safe test” for a score of 23.6 with the Irish-bred grey, Ballaghmor Class.

Team-mate, Laura Collett, then backed that up with a score of 25.80 for overnight fourth place individually with London 52, but she wasn’t overly pleased with her own performance. “He’s been phenomenal all year and I was aiming for (a score of) 21/22. This year he’s been very close to Ballaghmor Class, but unfortunately it didn’t come off today,” said the rider who, with the same horse, won the CCI5*-L at Pau, France last October.

However, her result was plenty good enough to secure pole position for her country.

It’s a fascinating leaderboard with two-thirds of the dressage competitors now completed. Lying second are Team Sweden, with the hosts from Japan in third and China in fourth place. Few would have expected Germany to be lying fifth and New Zealand, France, Switzerland, USA, and Australia stacking up behind them in the field of 15 nations.

A brilliant ride by China’s Alex Hua Tian with Don Geniro brought him closest to Townend’s leading score when putting 23.90 on the board for individual second place, while Germany’s Julia Krajewski and Amande de B’Neville lie third on 25.20.

The short action-packed dressage test, specially created for these Olympic Games, takes just 3.5 minutes to complete and, underlining the quality of the field, a total of seven combinations scored below 30 during the first session. Three more joined that elite group as the day progressed and amongst them was India’s Fouad Mirza riding the experienced 15-year-old gelding Seigneur that competed so successfully for Germany’s Bettina Hoy. “I’m so lucky to ride such a great horse; he’s a gentleman in every sense, kind and honest,” said the athlete who is only the third rider from his country to compete in Olympic Eventing.

Overnight there were some changes to the teams, with both Australia’s Stuart Tinney (Leporis) and Ireland’s Cathal Daniels (Rioghan Rua) withdrawing. Tinney has been replaced by Kevin McNab (Don Quidam) and Daniels by Austin O’Connor (Colorado Blue).

Townend said he wasn’t bothered by the pressure of being second into the arena and first to ride for his country. “It wouldn’t be my chosen job in life to be pathfinder, but at the same time the first bit is out of the way, and he’s (Ballaghmor Class) done a very commendable job. So fingers crossed we keep the work up over the next three or four days and see where we end up.”

There is a lot of talk about the course at Sea Forest where the cross-country phase will take place.

“It’s very intense,” Townend said about the track designed by America’s Derek di Grazia. “You’re always on the climb or camber or in the water, or in a combination. The questions are extremely fair; it’s very horse friendly, and if you took each fence individually there wouldn’t be too many problems, but at the same time when you add the heat, the terrain, the Olympic pressure, and then speed on top of that, it’s going to be causing a lot of trouble and it’s going to be very difficult to get the time.

“Derek is a horseman to start with, and I think he’s a special, talented man at the job. He wants the horses to see where they are going; there’s no tricks out there. Derek doesn’t try to catch horses out; he builds very see-able questions and lets the terrain and the speed do the job for him,” Townend added.

Doug Payne USA (lying 21st): “We prepped at Tryon and to me this course feels a lot like there, lots of turn backs…”

Germany’s Julia Krajewski (lying 3rd), talking about her mare Amande de B’Neville: “She’s a real galloping machine and a great jumper; she’s always willing to perform and especially this year after Sam (Samurai du Thot, her team silver medal winning horse at Rio 2016 Olympic Games) got seriously ill, it felt as if she really stepped up. Sometimes I think it’s when they feel they are the number one in the stable that they step up then!”

Philip Dutton USA (lying 12th), talking about Sunday’s cross-country course:  “I’ll spend tomorrow getting to know the course well so I can shave off every second I can, and figure out how close I can get to the jumps before I steady up, really get to know it well. It’s a course you have to understand; you have to keep thinking ahead before the next combination comes up.”

Kevin McNab AUS (lying 18th), who was called onto the Australian team when Stuart Tinney had to withdraw: “Unfortunately, one of those sports where it does happen. I’m sorry for Stuart but it’s great to be here and there’s such a wealth of knowledge between the team that I’m lucky to be making my debut with them.”

Victoria Scott-Legendre RSA (lying 37th), talking about the challenges of competing in her home country: “We are lucky enough to have some really nice venues in South Africa that have wild animals on the property, and I’ve had a dressage test where a herd of zebra have come through, and there are a couple of places where some giraffe have popped over the trees – the horses really are quite spooky with that; they do a 360 and off we go!”