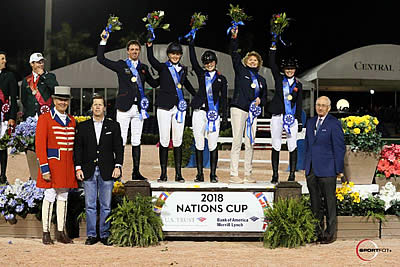 Saturday’s Nations Cup consisted of two rounds shown over a course set by Ken Krome (USA). Teams of four represented the nations of Argentina, Brazil, Canada, Chile, Great Britain, Ireland, Mexico, United States, and Venezuela. The six teams that returned for the second round in order from most faults to least were Chile, Venezuela, Ireland, Brazil, Mexico, and Great Britain.

Ireland finished second with five faults after double clear rounds from Shane Sweetnam and Paul O’Shea, and a second round clear from Denis Lynch. Their three clear performances in round two led to anchor Cian O’Connor not having to return.

Cracker Jack, piloted and owned by 14-year-old Natalie Jayne, earned the champion title in the Small Junior Hunter 15 and Under division to highlight hunter competition on Saturday.

Jayne, of Elgin, IL, won the under saddle and jumped to two firsts and a second-place ribbon aboard Cracker Jack, an 11-year-old Warmblood gelding. She has had the ride since June of 2017 and the pair recently competed under lights in the International Arena at WEF for the first time in the $100,000 WCHR Peter Wetherill Palm Beach Hunter Spectacular two weeks ago.