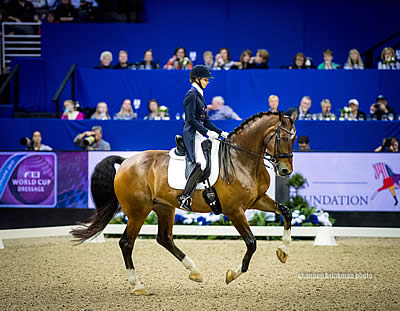 Omaha, Neb. – Laura Graves and Verdades scored a personal best Grand Prix Freestyle of 85.307% to place second in the FEI World Cup™ Dressage Final on Saturday. Kasey Perry-Glass and Goerklintgaards Dublet and Steffen Peters and Rosamunde closed out the competition in the top 10. Isabell Werth (GER) and Weihegold OLD were the 2017 champions with a score of 90.704%, while Carl Hester (GBR) and Nip Tuck finished third with a score of 93.757%.

Graves (Geneva, Fla.) and her own Verdades, a 2002 KWPN gelding, wowed the crowd with a fantastic freestyle full of artistic beauty and technically difficult elements. Two tempi changes on a curve followed by one tempi changes and lovely canter pirouettes mesmerized the home crowd.

“I was really looking forward to putting in a solid test today in the Final, knowing that we didn’t have the best of draws with all the big guns still to come in the class,” Graves said. “I’m super happy with my horse. He was awesome in that environment. He is known to be spooky, and he was just as steady as could be. It is a personal best score, and to do it here in Omaha, it feels great to have the crowd on their feet.”

Despite Verdades’ spooky nature, Graves felt that he was in his element in front of the home crowd. “They were cheering in parts of our test, and my horse was really enjoying it. Two years ago in Las Vegas, the crowd would cheer and he would spooky and get a little fast, and this year he was like, ‘Yeah, thanks guys!’ So it is awesome to be back with the same horse.”

Perry-Glass (Orangevale, Calif.) had a strong performance in her debut at the Final with Diane Perry’s Goerklintgaards Dublet. She and the 2003 Danish Warmblood gelding finished on a high note despite bobbles in an extended trot movement and in the one-tempi changes. The pair received a score of 77.068% to finish in seventh place.

“I am very happy [with our score]. This is his first time in the indoor; there is a huge crowd. I couldn’t ask for a better ride from him,” Perry-Glass said.

Peters (San Diego, Calif.) had a solid performance with Four Winds Farm’s Rosamunde in the one of the biggest tests of the mare’s career. The 2007 Rheinlander mare handled the electric atmosphere well thanks to Peters’ guidance. They executed wonderful pirouettes and half-passes. Peters and Rosamunde collected a score of 75.879% to finish ninth.

“She did great,” Peters said of “Rosie”. “It was a very difficult freestyle not just for an experienced Grand Prix horse but for a young one, so that she did as well as she did, I am super pleased with her.”