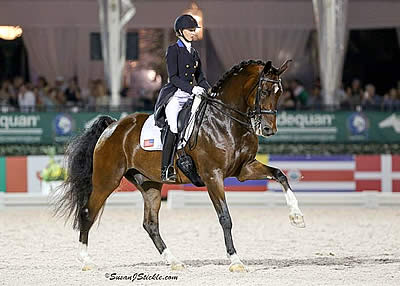 Wellington, Fla. – Closing out the Adequan Global Dressage Festival on a high note, Laura Graves and Kasey Perry-Glass placed first and second, respectively, in the Grand Prix Freestyle as part of the CDIO3* presented by Stillpoint Farm. The evening capped off a week of great success for The Dutta Corp. U.S. Dressage Team, who topped the podium for the fifth consecutive year in the country’s only dressage Nations Cup competition. Graves and Verdades posted their third personal best score of the week, winning the class with a score of 82.800%. Perry-Glass and Goerklintgaards Dublet also added another personal best to their record, scoring 81.325% for second place. Also representing the U.S. in the Freestyle, Arlene “Tuny” Page and Woodstock scored 75.925%, tying for fourth place.

Graves (Plymouth, Fla.) and her 2002 Dutch Warmblood gelding, Verdades, continued their winning ways with a spectacular Freestyle performance, becoming back-to-back double Gold medalists at CDIO3* Wellington, having topped the team and individual podiums in 2015. In a test that garnered huge cheers from the packed house at the International Arena, the pair fed off the electric atmosphere, showcasing brilliant extensions, pirouettes, piaffes, and passage. Graves added the score of 82.800% to her list of new personal bests earned this week. In team competition, Graves won the Grand Prix with a score of 76.860%, and the Grand Prix Special with a score of 78.294%.

Speaking to the feeling of marking the highest score in the history of the Adequan Global Dressage Festival tonight, Graves said, “It’s amazing. Obviously it’s a goal every time we go in the arena. It was an incredible atmosphere here tonight. I could not ask for a better high to end our season with: Team and Individual Gold medals and personal bests. Really exciting looking forward to the rest of this year and the amazing team USA we’re creating.”

Perry-Glass (Wellington, Fla.) and Diane Perry’s Goerklintgaards Dublet, a 2003 Danish Warmblood gelding, completed their first season at the Grand Prix level in commanding fashion. In only the second Grand Prix Freestyle of their career, the pair went into the arena with determination and were rewarded for their effortless harmony and accuracy. With a score of 81.325%, Perry-Glass not only eclipsed her previous Freestyle score, a 75.750%, but produced two personal record setting performances this week, having posted a new best score in the Grand Prix Special with a 74.882%. The pair finished second in the Grand Prix Special and the in the Grand Prix, where they scored 73.000%.

“I want to thank all the sponsors here tonight, my coach Debbie [McDonald], and my mom [Diane Perry] who is also my owner. I am so blessed. I could not have asked for a better year here,” said an emotional Perry-Glass. “At the beginning of the season I went in [the ring] just thinking ‘this is my first season at Grand Prix’ and never really went for it. It was a progression throughout the season and Dublet and I really formed a relationship to where I can have a conversation with him in the ring. He trusts me enough to push him enough and he showed that tonight.”

Rounding out the performances for the U.S. was Page (Wellington, Fla.) and her own Woodstock, a 2003 Dutch Warmblood gelding. The pair, who has been having a breakout season, performed a harmonious test under the lights. Adding yet another record setting personal performance to the night, the pair earned a score of 75.925%.

Head of the Ground Jury, Stephen Clarke of Great Britain, expressed how fantastic the level of competition was this evening. “We saw such harmony, lots of risk taking, high degrees of difficulty, and beautiful music interpretation. Just really super tests.”

Belinda Trussell of Canada and Anton placed third in the class on a score of 76.350%.