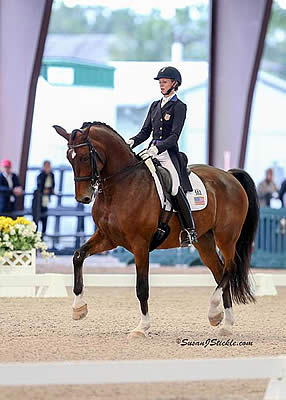 Kasey Perry-Glass (USA) and Goerklintgaards Dublet finished the FEI Grand Prix CDIO 3* in second place with a 73.000%, while Mikala Gundersen (DEN) and My Lady captured third place with a 72.240%. For computing team scores, the Large Tour combinations are given an extra 1.5 point bonus.

Graves and Verdades received a season high 76.860% and with the added 1.5 point bonus in Large Tour CDIO competition, sit on a 78.360% moving into the FEI Grand Prix Special CDIO 3* class. Graves is looking forward to the Special as she will expect another strong performance from Verdades.

“The last time that the show was forced inside, we had one of our lowest scores. Coming back in, especially in a team situation when everyone is counting on you as the anchor, I kept hoping that what happened last time wasn’t a normal thing and an anomaly,” said Graves. “We really wanted to conquer that today, and we did. He was just great. He gave me that same feeling that we had in the indoor before, but I was just able to ride it better this time.”

“I thought the zig-zag was great. The canter tour and the pirouettes felt super nice as well,” she continued. “We had an unusual mistake in the walk for us, but it was totally my fault. Now when things are perfect, I start to test and see how honest he is. It was a mistake; he was a little bit too sensitive for that.”

Graves quickly commented on the importance of riding in Nations’ Cup competition, especially when representing that United States in team competition is not something one can easily take for granted. With a few small steps of jigging in the walk tour, Graves felt that she and “Diddy” left a few costly marks on the table.

“The mistake today in the walk was disappointing for me because you know you’re riding for a team. If it was just for me, I probably would have laughed it off more, but he was so good everywhere else. It just proved that we need to study there more,” explained Graves. “It an unusual thing because the walk is so delicate in the show arena, and it’s always so expensive. You don’t want to have to train it in there, but it’s really the only place you can.”

“It’s a real honor to compete on a team and it’s different because no matter what, you have to show up for everybody else. As much as we can sometimes want to be down on ourselves or pick on our flaws, having a team around you makes you have to stick together and stay positive,” continued Graves, who is representing Team USA for the second consecutive year in Wellington, FL.

“You have to be there for one another. It’s amazing. This Team USA we have right now goes far beyond the Nations’ Cup team that we have here. There’s all of these American riders who show up and we watch each other ride and watch each other school. It’s nice having that camaraderie before we have to take it into a little bit bigger pond.”

Juan Matute Jr. and Dhannie Ymas impressed in the FEI Prix St. Georges CDIO 3* class with a score of 71.868%. The class was also held in Van Kampen Covered Arena due to inclement weather. Raul Corchuelo (COL) and Beckham earned second place with a 69.395%, while Katharina Stumpf (AUT) and For My Love stand in third place with 67.500%.

Matute Jr. has campaigned Dhannie Ymas through the circuit this season, recording top results aboard the 2007 Hanoverian gelding (Don Crusador x Welina) in their first season contesting the upper levels.

“I’m feeling very happy and proud. We made some mistakes that we need to improve before tomorrow’s test, but overall I think I had a great feeling in the test,” explained Matute Jr. describing his test. “Dhannie felt comfortable, but he doesn’t really like the covered arena as much as outside. It’s interesting how some horses perform better in different atmospheres, but overall I was really happy.

“With this test over the season I tried to get more towards the softer aids and the lightness in the contact, just making everything a bit easier. We’re riding horses and (try to) make everything as simple as possible and look easy. Little by little I think we’ve improved that this season,” he smiled

The pair had a slight moment of miscommunication in their first pirouette, but Matute Jr. continued on through the test with poise and accuracy, leading to their impressive score of 71.868%.

“We had a big mistake in the first pirouette. He can do them perfectly, but we just had a bit of a miscommunication,” explained Matute. “He’s a young horse, just nine years old, and it’s fine. We’ve been doing Young Riders for most of the season, and I think we’ve progressed a lot.”

In his third Nation’s Cup appearance for Team Spain at AGDF, Matute has solidified himself as an incredibly talented and motivated phenom of the sport, as the international experience he continues to gain only benefits his riding and training. In 2014, Matute earned the individual silver medal in Nations’ Cup competition aboard his Don Diego Ymas, which he still considers one of the greatest highlights of his young but budding career.

“In 2013, the team was made up of me, my sister, and my father, and my mother was the chef d’equipe, so it was pretty neat that it was our whole family. We came in fifth that year, and 2014 was a huge highlight for us because I placed second individually on Don Diego [Ymas] who is now my Grand Prix horse,” he noted.

Lars Petersen (DEN) and Svalegards De Luxe performed impressively in their first FEI CDI competition together this season, earning the win in the FEI Prix St. Georges CDI 1* presented by YellowBird Farm at AGDF with a 71.763%. Jane Cleveland (USA) and Monique finished in second with a 68.868%, while Jennifer Baumert (USA) and Ramiro finished in third place, just behind Cleveland with a 68.816%.

Petersen is very familiar with Svalegards De Luxe, a 2008 Danish Warmblood gelding (De Noir x Stjerne Askelund), since owner Jane Wareham purchased him as a six-year-old to bring up the levels under Petersen’s guidance.

“The horse is turning nine this year, and I got him for Jane as her horse. I’ve been riding him with her since she bought him. She’s going away for her job, and asked if I would show him for her a little bit so that’s what we’re doing,” said Petersen.

“He has good gaits, and he’s a good temperament. That was really was important for us but also nice to look at when we went to try him. Those were some of the reasons, but he was just turning six when she bought him so he was pretty young,” he explained. “He’s very talented, and I’m excited to have the ride on him for myself for a little bit.”

It was the first international competition for the pair and also Svalegards De Luxe’s first appearance back at AGDF in a substantial period of time, as he has mostly been in training with Petersen and Wareham. With correct gaits and a tremendous presence, Petersen is looking forward to watching the gelding progress through the levels over the course of the season.

“We’ll see how far he can go, but he definitely has the potential for Large Tour, for sure. I was mostly impressed that he went around,” laughed Petersen. “He hasn’t been off the grounds for nearly two years other than a national show I did with him, but that’s different.

“He was a little bit tense here and there, but that was expected and I think he handled it great. He tried very hard and I think we had some dumb little mistakes, but all of the difficult stuff he did really well,” explained Petersen, who was thoroughly impressed with his new mounts acclimation to an intense competition atmosphere. “We will start to work on the piaffe and passage a bit more and getting his topline stronger over the next few weeks and stuff like that. I really think that is the most important.”

The Adequan Global Dressage Festival (AGDF) is one of the world’s largest international and national dressage circuits featuring 7 FEI Dressage events, including a 5* and the only FEI Nations’ Cup Series CDIO in the Western Hemisphere. The AGDF offers more than $700,000 in prize money for the seven international competitions, making it one of the richest circuits in the world. The Stadium at Palm Beach International Equestrian Center facility includes the Van Kampen covered arena (made possible by Kimberly and Frederic Boyer and family) and four outdoor arenas with world-class footing, 200 permanent stalls, and a VIP seating area.