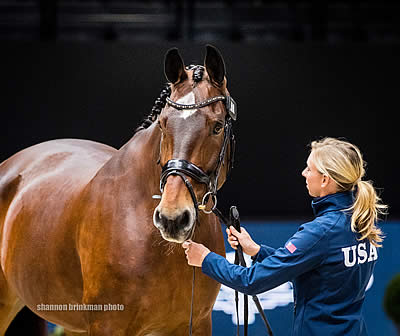 Paris, France – Two strong dressage combinations will represent the U.S. in the 2018 FEI World Cup Dressage Final at the AccorHotels Arena in Paris, France, April 13 and 14. Coming off high scores at the Adequan® Global Dressage Festival (AGDF), both Laura Graves and Shelly Francis, and their horses, are prepared and ready to compete.

“Omaha was an especially important event for us,” said Graves. “It is always terrific to ride in your home country, but this is my third World Cup [Final], and we’re here in Paris and honestly, just as excited. Hopefully, we are better than last year; hopefully we are better than we were yesterday. That is always our goal. It is also the first time [Isabell Werth] and I will be head-to-head since Aachen last year, where we were able to come out on top in the grand prix special. A lot of top competitors are here from other countries. We are certainly going to give it our best shot.”

Although a new face to the Final, Francis is a veteran and skilled competitor, selected as the traveling reserve with Doktor for the U.S. Olympic Dressage Team for the 2016 Rio Olympic Games, as well as with Pikant in 1996 for the Atlanta Olympic Games and in 1998 for the WEG in Rome.