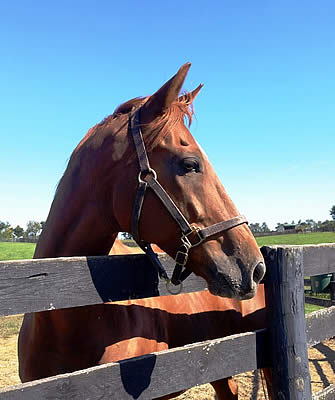 A California star on the turf, Daytona was bred in Ireland by the Irish National Stud and campaigned in the U.S. by conditioner Dan Hendricks.

A six-time stakes winner, he was in the best form of his career in 2007 and 2008 when he won the Grade 2 Oak Tree Derby, Grade 1 Hollywood Derby, and Grade 2 San Gabriel Handicap in late 2007, and three of his first four starts of 2008, including the Grade 1 Shoemaker Mile at Hollywood Park.

In 2008 the chestnut gelding finished 10th to super mare Goldikova in the Breeders’ Cup Mile at Santa Anita after tearing a tendon mid race. He attempted to return to the track in 2010 but could not recover his form and was retired. In 18 starts Daytona had eight wins and career earnings of $991,690.

Now 10 years old, Daytona has been generously donated to Old Friends by his current owners, Jocelynn Morgan and her husband, veterinary surgeon Dr. Joseph Morgan of Lexington. Mrs. Morgan had retrained Daytona for a hunter-jumper career but soundness issues have continued to hamper his progress and she felt permanent retirement was now in his best interest.

“Daytona is such a cool little horse – very bold and fun to ride,” said Mrs. Morgan. “We are saddened to see him leave our farm but happy that he will get to show off his huge personality to his admirers at Old Friends.

“Daytona is a wonderful addition to our farm,” said Michael Blowen, Old Friends president and founder. “We’re certain he’ll be very popular with visitors. We can’t thank the Morgans enough for entrusting their horse to us.”

For more information about Daytona or Old Friends, see their website at www.oldfriendsequine.org or call the farm at (502) 863-1775.