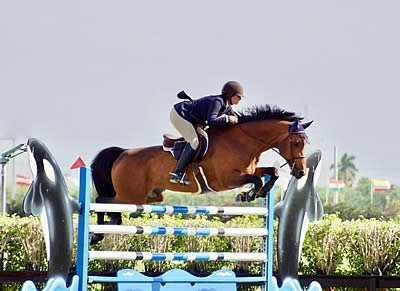 Larrazabal and Champion for Volt Blaze to Victory in 1.30m Open Stake

Wellington, Florida (March 28, 2017) – The second to last week of competition on the 2017 Palm Beach Series invited riders to the beautiful grass field and sand arena at Schuyler Riley’s Wolfstone Stables, as well as the pristine all-weather arenas of Jim Brandon Equestrian Center, where divisions from Teeny Tiny and Low Schooling Jumpers to the Grand Prix offered exhibitors the chance to show in a relaxed, utopian atmosphere. Organized by Nona Garson and George D’Ambrosio, the Ridge Palm Beach Series combines their vision of a laid-back, exhibitor focused event with the flair of the old world European tours where Garson’s career as an international and Olympic show jumper flourished. An expansion of their popular Turf Tour dates, which feature show jumping for all levels on springy turf courses at spectacular venues around Wellington, 2017’s line-up included 3 Hunter Derby Day events, weekly USEF Equitation Tuesdays, full jumper divisions running Wednesday-Sunday, and Palm Beach Series Schooling Dressage, which incorporates the same principles for developing dressage horses and riders.

The highlight of each weekly competition on the Palm Beach Series is the Turf Tour Grand Prix, which was hosted most recently on March 24 at Schuyler Riley’s Wolfstone Stables. The elegant turf field, lined by active polo matches and Wolfstone’s sand arena, which doubled as Jumper Ring 2, took on the designs of Pierre Jolicoeur for the 1.25m-1.30m divisions in the morning and the 1.40m Grand Prix in the afternoon.

Ireland’s Darragh Kenny set an early standard in the Grand Prix that held through the majority of the day. Jumping off immediately after his first round clear with Oakland Ventures’ Billie Onslow, they were the first double clear on 38.644. Despite impressive efforts from some of the sport’s top names, including Kenny’s countryman Daniel Coyle, England’s Peter Jordan, Canada’s Kevin Crosby, and USA’s Molly Ashe, Kenny maintained his lead until the very end of the class. Late in the day entries from Lisa Goldman of Red Coat Farm in Chicago, Illinois were the final horses to go, and a fast and clear effort from Goldman and Sovereign, owned by Barbara Disko, stopped the timers at 36.614 to put them at the top of the class. Canada’s Kevin Crosby and Concelo, owned by Sher-Al Farm, rounded out the top three with the third fastest double clear effort, finishing on 38.768 seconds.

Goldman, who has numerous Grand Prix victories to her name including a 2016 Turf Tour Grand Prix with her other mount, Morocco, commented on her ride, saying, “This was Sovereign’s first time ever showing on the grass, and it obviously was too his liking. I started him off pretty slow but he placed well in the 1.40m FEI class this year and now won here on the Turf Tour, so he’s definitely an up and comer of mine. There was at least one tricky line, and I chose to leave out a stride to one of the oxers and was trying to be very quick after which paid off. I love showing on the Turf Tour; it’s something different to do and a great environment for the horses. Nona and George make it super easy and convenient to come and jump, and make it easy to fit into our winter schedule. This farm was just stunning, as all of their venues are, and I’m really happy we decided to make a last minute choice to come show!”

Kenny, who was victorious with Diamond D a few weeks ago on the Turf Tour, stated, “I really like the show and the concept, especially for horses getting going again. It’s not a huge pressure situation for them and a nice, different environment especially for younger horses that are being developed for the bigger, more intense classes. It’s also a nice change to show on the grass. Their [the organizers’] idea is super and it’s a great concept for the horses and riders.” Following in the same vein, Crosby, who has topped The Ridge Palm Beach Series $5,000 1.30 Open Stake and utilizes the Turf Tour’s atmosphere to continue to develop his horses, also reflected on the importance of a relaxed environment and change of scenery for his mounts: “I’ve become more and more familiar with The Ridge and its organizers, and they do a great job creating a relaxing environment and providing an opportunity to develop horses.”

The aptly named Champion for Volt, with Luis Fernando Larrazabal in the irons, blazed around Saturday’s 1.30m course to emerge victorious, securing the win following a double clear effort and jump off time of 31.233. Larrazabal knew he needed to shave as many seconds off his time as possible to best Audrey Robison and her scope chestnut Gorky, who had jumped clean and fast to lead the class with a 32.508.

“We did one less stride to the second oxer, and then I kept him in that forward rhythm in the tight turn to the last jump, which I think is what gave me the best time,” said Larrazabal, who early in the season won the Palm Beach Series’ 1.40m Grand Prix with Altodetto and the week after placed second in the same class with G&C Close Up. Owned by Augusto Surico, Champion for Volt began his career with Larrazabal at the end of 2016 and the pair has been doing the 1.30m and 1.40m classes as they develop their partnership. “He is super easy to ride, very careful, and has an excellent technique,” Larrazabal continued. “I love to bring my horses here [to the Palm Beach Series]. It’s great for horses that are moving up, to give them a quiet place to build their confidence while still presenting a challenge to allow them to develop. The Turf Tour is fantastic; it’s great for all of the horses to get a change of scenery, of footing, and environment as showing the same place over and over can be very tiring.”

Third place in the Open Stake went to Casey Larruso and Cool Runnings, who also delivered a quick, clean double clear effort and jump off in 33.299.