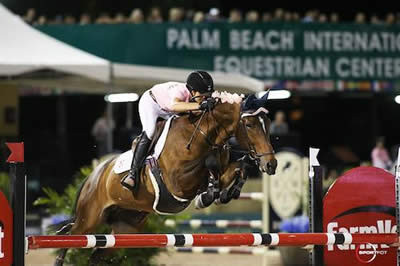 Heather Caristo-Williams and Wistful during their speed round. Photos copyright Sportfot.

Wellington, FL – January 16, 2016 – Men and Women were pitted against each other for the eighth annual $75,000 Battle of the Sexes in front of a crowd of more than 5,000 spectators during the first “Saturday Night Lights” of the 2016 Winter Equestrian Festival (WEF) at Palm Beach International Equestrian Center (PBIEC). After three rounds of competition that ended in a duel between the final two riders, the women broke the tie that ended the 2015 battle to come out on top this year.

The first week of WEF will conclude Sunday, January 17, with the $75,000 Rosenbaum Mollengarden PLLC Grand Prix at 2 pm. WEF, which kicked off on Wednesday, continues through April 3 and awards $9 million in prize money.

The two teams competed over three phases including a speed course, relay and match race, all set by U.S. Course Designer Eric Hasbrouck. In the speed round, the women established an early lead with a seven to three score. The men, however, answered in the relay and jumped ahead 13 to 12.

The match race determined the final standings with one member of each team jumping identical courses at the same time on opposite sides of the International Arena. The men won the first four rounds worth three points apiece before Pasmore and Catara 4 put the women on the board by toping Granato in the fifth race. She gained the momentum her team needed to make a comeback, and the women crossed the timers first in the next four races.

McArdle beat Prudent in the second-to-last race to set the stage for a head-to-head battle between captains King aboard Hoover and Jayne on Endy in the final race.

King had an early rail, but Jayne suffered a refusal soon after to open the door for her to cruise through the final timers ahead. The final score stood at 30 to 25 for the women, a team that was made up by 10 female riders, but also six mares.

McArdle was ecstatic to help her team secure the win in her second year competing in the Battle of the Sexes.

“I kept looking over knowing I had to do eight strides and get off the ground,” she said of her match race performance. “It was a fantastic feeling and so fun to have someone riding right next to you – it really puts on the pressure.”

For King, she enjoyed seeing a packed house at PBIEC Saturday night.

“The crowd understands men versus women, so they get behind us and our horses. When these horses hear the cheers, they know it’s game on,” she said. “It’s a great way to start the season, and we all look forward to it every year.”

King also acknowledged that, while the competition is exciting, she thinks the Battle of the Sexes is an opportunity to showcase show jumping to a new audience.

“We want to promote our sport and this introduces the local community to what we do and gets them to come back again,” she said. “For me, it’s not just about having fun; it’s about educating the public and getting them to have fun and grow this sport. We have to thank Equestrian Sport Productions because they have done a great job at encouraging that growth.”

After only ten days in the irons of 12-year-old Dutch Warmblood stallion Warrant, Mexico’s Alberto Michan topped 19 pairs to win the $25,000 Suncast® 1.50m Classic Saturday afternoon. Michan recently took over the reins for owner Ilan Ferder Stables and will pilot Warrant throughout WEF.

Seven horses advanced to the second round where five produced double-clear efforts. Heather Caristo-Williams (USA) and Qui Vive Des Songes Z posted an immediate clear in 38.72 seconds. Two trips later, Michan beat her by nearly three seconds and put down the unbeatable time in 35.86 seconds. Paris Sellon (USA) returned sixth and did her best to catch Michan, but was fractions too slow for second place aboard her own Adare in 35.93 seconds. Caristo-Williams settled for third for Mr. & Mrs. Ralph Caristo.

In general, Michan admits the first week of WEF could not have gone better for Ilan Ferder Stables.

“We had the best week we could ever dream of – all clear rounds all week long. Then to win the big class we planned to do; it’s fantastic,” he said. “I have a great team and a set of horses who I think can jump anywhere in the world. I am very excited for this year, and I hope it keeps going like this.”

After a short introduction, Michan has already formed a bond with Warrant.

“I think he was happy with me. I felt him really listening and trying for me,” he said. “He has a great mind and all the scope to turn tight to a fence and jump from wherever he stands.”

Michan and Ilan Ferder Stables will take a break during Week 2 and will compete again during the Adequan® CSI 3*, which kicks off on January 27.

“There are many big classes here, so it’s a good thing I have three nice horses to jump the grand prix (classes) with. We don’t want to burn them,” said Michan who will also ride aboard Ferder’s Czardas Z and Baronez throughout WEF.

Styslinger is still getting to know O’Ryan as their partnership just formed two weeks ago. “This is my first horse show with him,” she said with a smile. “I have two large juniors. He rides pretty similar to them. I’ve had [that horse] for a bit longer, so it’s helped me ride [O’Ryan] better. He almost rides like an equitation horse, but he jumps and moves well enough for the hunters. He’s so easy and is as quiet as he can be. He’s easy to deal with.”

While she is still learning about him and his quirks – “He likes to be by himself and do his own thing. We give him treats, but he likes to be alone,” she described – Styslinger is excited about the great start to her second year at WEF.

“It feels like it’s going to be a great season down here. I’m excited,” she said.

The first week of WEF will come to a close on Sunday with the $75,000 Rosenbaum Mollengarden PLLC Grand Prix, held in the International Arena, as well as hunter action including the Karina Brez Amateur-Owner Over 35 3’3″ Hunters.