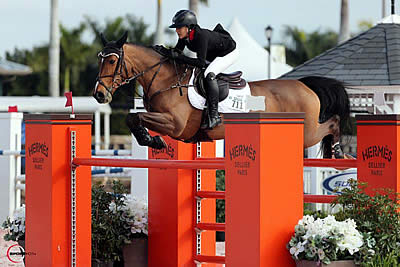 Opening the day was the $25,000 Hermès Under 25 Grand Prix, which had 44 entries. Six were clear to advance to the jump-off over International Arena tracks set by course designer Oscar Soberon of Mexico.

With the advantage of going last in the jump-off, Lacey Gilbertson, 24, watched and saw what she needed to do for the win. She and Baloppi, an 11-year-old Danish Warmblood mare owned by Seabrook LLC, galloped through the timers in 31.756 seconds.

Emily Moffitt (GBR) and Zagahorn, a 14-year-old KWPN gelding by Matterhorn owned by Poden Farms, finished third with a time of 32.793 seconds.

Marilyn Little and Clearwater Return to the Ring for Win in $35,000 Hollow Creek Farm 1.45m Classic

With 75 entries in the class, and 28 clear rounds, Sunday’s $35,000 Hollow Creek Farm 1.45m Classic proved to be a formidable challenge for the riders in the class. Out of the 26 who chose to return for the jump-off, it was a race to see who could be fastest out of the 12 clear trips over the shortened course designed by Oscar Soberon (MEX).

Despite recently returning to riding after an injury, Marilyn Little of Frederick, MD rose to the challenge to pilot Clearwater to a blazing jump-off time of 36.23 seconds for victory.

Second place went to Wilton Porter (USA), who nearly caught Little as the last to go in the jump-off riding Delinquent JX, an 11-year-old gelding by Darco, to a time of 36.65 seconds. Emily Moffitt continued her successful start to WEF with a third-place finish on Galip and turned in a time of 37.09 seconds.

The E. R. Mische Grand Hunter ring witnessed an exciting comeback made by Stephanie Bulger of New York, NY and her mount Mariano, a 13-year-old Holsteiner gelding, on Sunday as she took a first, second, and seventh over fences in the Wanderers Club Adult Amateur Younger Sec. B division to claim the championship title. The second week of the Winter Equestrian Festival marked the pair’s first time back in the show ring together after a three-and-a-half-year hiatus.