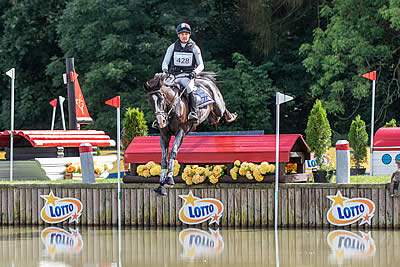 German riders were victorious in the second leg of the FEI Nations Cup in eventing, winning both the team and individual classification. Poland finished on the third place.

The win for the German team was guaranteed after the cross-country trial, leaving the previous leaders – Netherlands – in the second position. Ingrid Klimke with SAP Asha P had the best result in the team, and Andreas Dibowski with FRH Corrida, Beeke Jankowski with Tiberius 20, and Heike Jahncke with Mighty Spring were competing alongside her. The current European champion also won the class individually. She took the lead with the 16-year-old gelding SAP Hale Bob OLD after dressage, and even a knockdown in the jumping and points for time in the cross-country did not take away her best position.

Dutch riders Merel Blom with Ceda N.O.P, Jordy Wilken with Burry Spirit, Raf Kooremans with Dimitri N.O.P, and Laura Hoogeven with Wicro Quibus were in the lead after two trials, but eventually ended up on the second position. The best result in the team and third place individually belonged to Merel Blom.

The cross-country trial made the Polish team go up into the third position: Mateusz Kiempa with Lassban Radovix, Joanna Pawlak with Fantastuc Frieda, Jan Kamiński with Senior, and Michał Hycki with Moonshine. The best result among them belonged to Mateusz Kiempa, as he finished fourth in the individual classification. He was in the second place after dressage and jumping, but points for time on the cross-country course made him miss the podium.

„I’m happy with my performance, but I think that we should firstly look at the team score – everyone did very well, and I think we should all be pleased about it,” said Kiempa after the prizegiving ceremony.

Saturday was also cross-country day for the long format classes. The new best result in the CCI4*-L is that of Jonelle Price with Grappa Nera. The rider from New Zealand went clear in the XC and took the lead away from her husband Tim Price. The current number one in the CCI3*-L class is Julia Mestern from Germany with Monarts Masterpiece, and the leader in the CCI2*-L is Dutch rider Merel Blom with Corminta vom Gwick.

Saturday’s cross-country was the last trial of the CCI1* Intro, where the winner was Sophie Leube (GER) with Skyjacker 3.

More than 270 horses from 11 countries compete in 11 classes during LOTTO Strzegom Horse Trials.