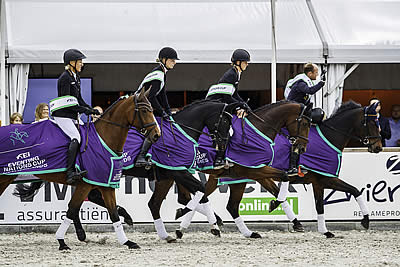 In the thrilling finale to the FEI Eventing Nations Cup™ 2019 series at Boekelo, The Netherlands, Team Germany posted their fourth win of the season while league leaders Sweden held on to take the series title. However, some of the biggest smiles were on Swiss faces when they pulled Olympic qualification out of the bag.

There were three teams in contention for the single ticket to Tokyo 2020, and Dutch hopes were dashed when they found themselves lying eleventh of the 12 competing nations after Saturday’s cross-country phase. But Switzerland and Belgium slugged it out to the very end, with the final series rankings swinging the pendulum in favour of the Swiss.

There was plenty of movement below them as the cross-country course designed by Adrian Ditcham played its part. Australia climbed from sixth to second thanks to brilliant clear runs inside the time by Chris Burton (Clever Louis) and Kevin McNab (Fernhill Tabasco), and the Belgians rocketed up from seventh to third, thanks in no small part to a great performance from Lara de Liedekerke-Meier (Alpaga d’Arville) and just 3.6 time penalties for Constantin van Rijckevorsel (Beat It). With a two-phase tally of 117.50, they were lying just over three points behind Australia and just ahead of the Japanese who were in fourth going into the final day, while the Swiss also made serious headway when soaring up from 12th to fifth, their running total of 125.90 leaving them just eight points adrift of their Belgian rivals as the action resumed.

And it was a real roller-coaster in the battle for the team placings, with the 84-seconds time-allowed proving difficult for many to get.

The team partnerships were last to go, and the Belgians dropped down the leaderboard when adding 30.80 to their tally. However, despite the addition of just 0.40 for pathfinder Caroline Gerber (Tresor de Chignan CH) for going over the time, the Swiss also lost their grip when putting 30.00 more on the board. Robin Godel (Grandeur de Lully CH) collected 13.20 on his tour of the 12-fence track while Tiziana Realini (Toubleu de Rueire), who had produced one of those precious cross-country clears, posted 16.4 to bring their team total of 155.9, leaving the Swiss just behind their Belgian rivals in seventh place at the end of the day.

The Olympic spot would be earned by the country lying highest of the unqualified nations in the final FEI Eventing Nations Cup™ 2019 standings. The Swiss lay third coming into this seventh and last leg, and their final total of 370 points left them well clear of the Belgians who completed with 355. Meanwhile, with their closest opposition from Italy not lining out this time around, the leading Swedes, carrying 435 points, had a clear run to the 2019 title despite finishing tenth at this last leg.

At the sharp end, Germany held on for a convincing win on a final scoreline of 94.10, while a clear from Burton, 5.20 for McNab, and just four faults for Samantha Birch (Finduss PFB) secured runner-up spot for Australia on a final tally of 123.50. Japan finished an impressive third, Kazuma Tomoto (Bernadette Utopia) and Atsushi Negishi (Ventura de la Chaule JRA) going clear in both of the final two phases while Yoshiaki Oiwa (Bart L JRA), who had been lying individually second after dressage but who was penalised for a cross-country refusal, had a pole down at the penultimate triple combination. The Japanese finished less than a single penalty point behind the Australians, and it is quite clear they will be a force to be reckoned with on home ground in Tokyo next summer. Fourth went to New Zealand (130.00) and fifth to Great Britain (143.00).

The very last rider into the ring, Germany’s Auffarth, had individual glory in her grasp until hitting the last element of the triple combination, which dropped her to fourth and opened the door for Great Britain’s Laura Collett (London 52) to take the individual honours.