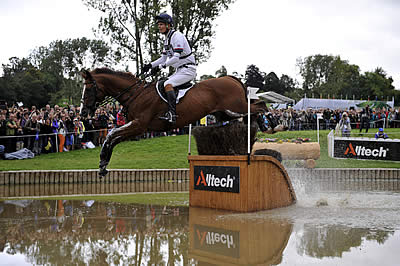 Normandy (FRA), 30 August 2014 – Germany is still on course to win team gold at the Alltech FEI World Equestrian Games™ 2014 in Normandy, but Great Britain has closed the gap after a thrilling day’s Cross Country during which the huge cheering crowd witnessed some truly outstanding horsemanship.

Britain, the only team to have four clear rounds, has risen from fifth to second place and is within three Jumping fences of the Germans. Australia is now third, France fourth and Netherlands sixth after the dramatic departures of the New Zealand and US teams.

William Fox-Pitt (GBR) conjured a brilliant performance from Chilli Morning and now heads the individual Cross Country leader board, on a score of 50.3. But the British camp is in subdued mood after the sad loss of Wild Lone, the horse ridden by team anchorman Harry Meade into 25th place with 26.4 time penalties, which collapsed and died after the finish.

“Harry is a close friend of mine and it’s hard to celebrate much,” Fox-Pitt said afterwards. “It was the hardest terrain I’ve ridden, because the ground was very soft and the course demanding, but Chilli gave me a lovely ride. There are not many Eventing stallions who would keep trying for you like that and I’m very proud of him.”

Despite the devastating tragedy for Harry Meade, he was determined to state that he felt the Cross Country course played no part in Wild Lone’s death.

“The ground conditions played no part in what happened to Wild Lone,” said an understandably emotional Meade. “He gave me a wonderful ride and felt extremely comfortable. I’m obviously devastated but I want to say that I thought the course was a very good test and I would be very sad if anybody was to draw any incorrect conclusions that the tough, testing nature of the competition in any way contributed towards what happened.”

There were 40 clear rounds and 63 completions from the 87 starters, including many excellent displays of sympathetic horsemanship.

An exciting Jumping phase is in store tomorrow as only 2.2 penalties cover the first five riders on the individual leader board. The Dressage leader Sandra Auffarth (GER) had a superb round on the powerful French-bred chestnut Opgun Louvo. She added 16.8 time penalties compared to Fox-Pitt’s 12.8, and is now in second place just 1.7 penalties adrift on a score of 50.2.

“She did a wonderful job,” said Jung of his gallant mare. “She was very focussed. I gave her a little more time in between fences, but her energy when she saw the fences and lit up was fantastic.”

Ingrid Klimke (GER) incurred 32.4 time penalties on FRH Escada JS and is now in 21st place, while Dirk Schrade is Germany’s discard score after two run-outs on Hop and Skip.

The New Zealand team had a less than happy day, but individual rider Jonelle Price produced the class round of the day, finishing with fastest time to collect just four penalties, rising 22 places to fourth on the neat little thoroughbred Classic Moet.

Andrew Nicholson (NZL), the only remaining member of the Kiwi team, also made Pierre Michelet’s exacting course look easy and produced the second fastest time, for 7.2 penalties. He is now in fifth place on a score of 52.5 on Nereo and is another within touching distance of becoming his country’s fourth world champion, following Blyth Tait (1990 and 1998) and Vaughn Jefferis (1994).

New Zealand’s pathfinder Mark Todd fell when Leonidas ll tripped on landing up the step out of the water at fence 30, which was the most influential obstacle. Then Tim Price on a tiring Wesko was pulled up by stewards near end of the course. Jock Paget, third after Dressage on Clifton Promise, was left to go all out for an individual medal, but pulled up after a run-out at the second corner at fence 5 and plans to re-route to Burghley next weekend.

The USA team was eliminated when their first two riders, Buck Davidson (Ballynoe Castle RM) and Phillip Dutton (Trading Aces), both retired. Their best rider is Boyd Martin, who is in ninth place with Shamwari.

Badminton winners Sam Griffiths and Paulank Brockagh, 17th, were excellent pathfinders for the Australian team, who are now in bronze position. With the team down to three riders, following the withdrawal of Christopher Burton’s TS Jaimaino due to colic, there was great pressure on Shane Rose (Taurus, 30th) and Paul Tapner (Kilronan, 13th), who both went clear.

The French team is fourth, with their youngest rider, Maxime Livio, the highest-placed in eighth on Qalao des Mers. “I have never ridden with such patriotic support, not just for French riders but for every nation,” he said.

There were many notably determined performances, including that of British pathfinder Zara Phillips, for whom this was by far the biggest test since giving birth to her daughter Mia in January. She survived an alarming moment at the bounce of hedges after the water at fences 17-18 and found herself hanging perilously out of the back of the saddle, but recovered well and is now in 15th place on High Kingdom.

“My horse was definitely in charge,” said the 2006 world champion. “I was just steering and trying to hang on. I was too far off the hedges but he got me out of trouble. I wasn’t nervous because I knew the horse I was on. He was fantastic.”

Sam Watson, 23rd on Horseware Bushman and pathfinder for the sixth-placed Irish team, summed up the day. “You had to combine looking after your horse with remembering it was a world championship and riding for your life. For me, it feels like a great day’s hunting in Ireland when you’ve jumped fences you’d never dreamed of and you’re now in the pub recovering!”

Tomorrow, there will be a final Horse Inspection at Haras du Pin before the horses are driven to Caen for the Jumping phase which starts in the main D’Ornano Stadium at 14.00 CEST. Follow all the action on FEI TV (www.feitv.org) and with live scoring on www.normandy2014.com.

The Alltech FEI World Equestrian Games™ 2014 in Normandy (FRA) on 23 August – 7 September brings together close to 1,000 riders and 1,000 horses from 74 nations for 15 days of world-class competition in Jumping, Dressage and Para-Equestrian Dressage, Eventing, Driving, Endurance, Vaulting and Reining.

The FEI World Equestrian Games™ are held every four years in the middle of the Olympic and Paralympic cycle. They were first hosted in Stockholm (SWE) in 1990 and have since been staged in The Hague (NED) in 1994, Rome (ITA) in 1998, Jerez (ESP) in 2002, and Aachen (GER) in 2006. The first Games to be organised outside Europe were the Alltech FEI World Equestrian Games™ in Kentucky (USA) 2010.