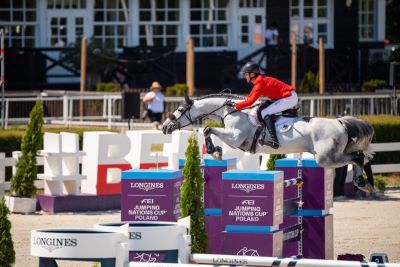 The weather was hot and the excitement was intense as Team Germany won through at the third leg of the Longines FEI Jumping Nations Cup™ 2021 series at Sopot in Poland.

The 1,200 spectators permitted to attend the event at the sun-soaked Baltic seaside venue enjoyed a great day of sport in which the result was undecided until the last man rode into the ring. A clear from Belgium’s Niels Bruynseels would force a jump-off with the eventual winners, but it wasn’t to be as poles down saw his side having to settle for runner-up spot, leaving Maurice Tebbel, Marcus Ehning, Christian Kukuk, and Andre Thieme standing on the top step of the podium.

German Chef d’Equipe, Otto Becker, was well pleased with his side’s performance. “I’m a very happy man because we were the only team to stay clear today, and to have three double-clears is amazing!”

At the halfway stage it seemed likely that a jump-off could be on the cards, because Germany, Ireland, Norway, and Belgium were all on a zero scoreline. But this competition really was a game of two halves, and the Irish and Norwegians lost their grip when each added 16 faults second time out.

The course designed by Poland’s Szymon Tarant was big but relatively uncomplicated, and although some riders suspected the yellow wall at fence eight would prove daunting, it went almost unnoticed until the USA’s second-line rider, Bliss Heers, took a flying fall there when Antidote de Mars tumbled through it. Horse and rider seemed none the worse afterwards, but the Americans finished on a total of 20 faults along with the French and had to settle for seventh place in the line-up of 10 teams at the end of the day.

The British proved competitive to the very last. Carrying just four faults into the second round their prospects dramatically improved when Alexandra Thornton (Cornetto K) and Harry Charles (Romeo) both delivered lovely clears. And although Joseph Stockdale (Equine America Cacharel) had three fences down, they looked set to stay well in the frame if anchorman William Funnell (Equine America Billy Diamo) could leave the fences up and keep them on that four-fault tally.

But his big chestnut gelding had already hit the opening vertical and the middle element of the triple combination at fence four before knocking the following oxer at five and unseating his rider who was stretchered out of the arena with an ankle injury. So the British would finish fifth behind Norway in fourth and Ireland in third when all three sides completed with 16 faults on the board and were separated only by their combined times in the second round.

Meanwhile, the Germans and Belgians slogged it out at the sharp end.

Germany’s Tebbel and Don Diarado kicked off round two with a second fabulous clear, but Ehning added four to the eight faults he picked up in the first round with Funky Fred. He competed wearing a yellow armband in memory of young Irish Eventing athlete Tiggy Hancock, whose tragic death at a training session in Ireland last Wednesday has deeply saddened the equestrian community. Marcus was Tiggy’s hero, and all the Irish team also wore a similar armband.

Then Kukuk set off with the stunning grey stallion Mumbai who, for the second time, made the course look very elementary indeed, and when Thieme’s mare, DSP Chakaria, was fault-free once again this kept his side on a zero scoreline and all the pressure was now piled onto Belgium’s Niels Bruynseels.

His team-mates Jos Verlooy with Varoune and Nicola Philippaerts riding Katanga v/h Dingeshof hadn’t put a foot wrong all day, and although Pieter Devos’ mare, Claire Z, hit the final vertical second time out, the Belgians could also finish on a zero and force a jump-off if Bruynseels and Delux van T&L could leave the course intact when last to go.

It wasn’t to be when the oxer at fence two and the first element of the double at six, which became quite a bogey in the second round, both hit the floor. Now the four picked up by Devos would have to be counted and the German win would be clear-cut.

Christian Kukuk was thrilled with the performance of his nine-year-old stallion Mumbai and said the weather conditions were highly influential in deciding the result. “In general, this was a fair course as you could see when four teams were clear at the end of the first round. But we were competing at the hottest time of the day; it was over 30 degrees, and you could see how that affected horses at the end of the course in the second round when there were many mistakes.

“I wasn’t worried for myself and Mumbai though because he has a lot of power and I knew he wouldn’t get tired. The more he jumps the better he gets!” Kukuk said of the grey stallion who, although still only nine, shows maturity well beyond his years. He has high hopes that Mumbai will take him to the Tokyo Olympic Games this summer but admits that qualifying for the German team is never easy because the competition for places is so strong.

Sopot Show Director, Kaja Koczurowska Wawrzkiewicz, congratulated the German team on their victory. “After two wins for Belgium, we have a change this year! This show is very important for the Polish Equestrian Federation and it’s great to have the riders back in Sopot after the difficult year we have all experienced,” she said.