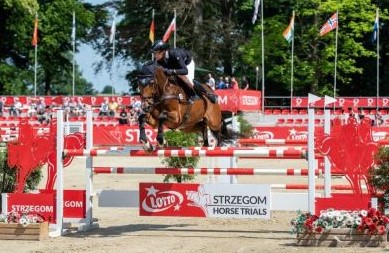 The German team was the best in the second leg of the FEI Eventing Nations Cup in Strzegom. Second place went to the home squad and third to Belgium.

The German riders took the lead in the showjumping, besting the Polish team that was in the first position after dressage and cross-country. Josefa Sommer with GEKE Equigrip’s Simple Smile was the best of the team riders and she stood on the podium alongside Elena Otto-Erley with Finest Fellow, Katharina Tietz with Aspen T, and Nadine Marzahl with Victoria 108. The individual winner of the class was another German rider, Jule Wewer aboard Ruling Spirit. Even after two knockdowns in the jumping, her lead after the XC was big enough to secure her victory. Second place went to India’s Fouaad Mirza with Dajara 4.

“I think it was a big course. I have a good jumping mare, but I’m not such a good pilot, so I had one down, but the team was so good that we could win. I’m very happy that we had an all-girls team and it was a lot of fun,” said Josefa Sommer from team Germany.

The home nation that kept their dressage lead throughout the cross country made some mistakes and finished in second place. The best result belonged to Mateusz Kiempa with Lassban Radovix, whose clear round placed him in the third position individually.

“Lassban jumped great. I’m very pleased with him and we had a good result. As a team we lost the lead, but I think that we should be really happy with ourselves, it’s a historic result for Poland and the highest we ever ranked in a Nations Cup,” said Kiempa.

Third place went to the Belgian team, who jumped up from the fourth after the cross-country. Five teams competed in the class overall.

In the CCI4*-L, the most difficult at LOTTO Strzegom Horse Trials, the win belonged to Poland’s Małgorzata Korycka with 10-year-old Canvalencia. The rider was eighth after dressage, jumped up to third in the cross-country, and went through the jumping course clear, just three seconds over the time. Second place went to Pietro Grandis from Italy with Go For S. The leader after XC, Malin Josefsson (SWE) with Maggan V, made some mistakes on the fences and finished third.

Sandra Auffarth with Rosveel won the CCI3*-L class. In the CCIY3*-L the best results belonged to Julia Gillmaier from Poland, who took the first place with Red Dream Princes and second with Rarashek. At the same time, she defended her title of the Polish National Champion in the young riders’ category.

The CCI2*-L ended with the win of Belgium’s Lara de Liedekerke-Meier with Formidable 62. The best three in the CCIJ2*-L were Polish riders that also competed in the National Championships for juniors. First place went to Zuzanna Społowicz with Bankier, second to Karolina Ślązak with Ganges, and third to Weronika Król with Perez.

Sunday was also the cross-country day for the short-format classes. The best rider of the CCI2*-S was Louise Romeike from Sweden with Caspian 15, and in the CCI3*-S the win went to Lara de Liedekerke-Meier from Belgium with Ducati d’Arville.