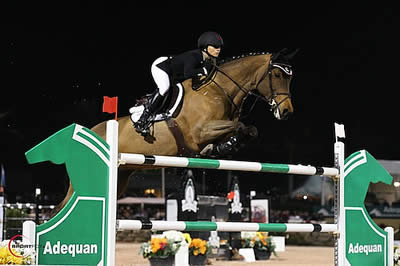 Watch Georgina Bloomberg and Lilli in their winning round!

With a class of 45 entries and 13 different countries represented, the five riders from the USA were the only contestants able to make it through to the jump-off over Leopoldo Palacios’ (VEN) Saturday night course. The competition was the highlight event of week three at the 2015 WEF, sponsored by Adequan®. The 12-week circuit continues through March 29, awarding over $8.2 million in prize money.

First to go in the grand prix jump-off, Laura Chapot raced through the short course with Mary Chapot’s ISHD Dual Star and set a very fast pace in 48.06 seconds. Todd Minikus followed with Two Swans Farm’s Babalou 41, finishing almost four seconds faster in 44.77 seconds, but had a rail going into the double combination. Schuyler Riley and Wolfstone Stables’ Dobra de Porceyo were next to go with a clear round in 49.66 seconds. Wilton Porter and Sleepy P Ranch LLC’s Diamonte Darco crossed the timers clear in 48.43 seconds. Last in the ring, Georgina Bloomberg and Lilli galloped to victory in 46.98 seconds.

Bloomberg has ridden Lilli for about two and a half years and stepped the mare up to the grand prix level last year. Lilli has served as a second horse to Bloomberg’s top mount, Juvina, but is now moving up to even out the workload.

“This was one of my first big grand prixs with her and my first time jumping her under the lights,” Bloomberg explained after her win. “I have felt more confidence with her, and she has been jumping well over bigger jumps. I felt like tonight was a good opportunity for her to step up, and I was very happy with her.”

Describing the mare’s character, Bloomberg noted, “She can be a little bit too relaxed. She will be a very good broodmare one day. She is very happy sitting in the field getting fat, so sometimes to get her motivated to show and pay attention to the jumps is difficult, but she is a naturally careful horse and has all the scope. She is very reliable. Going under lights is very good for her because it piques the interest of most horses. Sometimes being a little too relaxed during the day can change when you are jumping under the lights. They will pay more attention and be more careful.”

Bloomberg admitted that although she watched some of Laura Chapot’s opening round in the jump-off, she did not pay close attention to it because she did not think she would be able to catch the speedy rider.

“I thought that whatever I did, she would be faster, so there was no point in watching her go,” Bloomberg laughed. “I didn’t get to watch her round carefully enough to see the route she took, but my horse has a big stride. Even though her horse is quicker, I tried to make up for the fact that I’m on a big, slow horse and leave strides out between the jumps.”

This was Bloomberg’s first win in a major Saturday night grand prix at WEF as well as a great start to her 2015 season.

“I have never won a Saturday night class here before. This is my first, and my first big class of the season, so it is nice to start out on a good note and get that first win here,” the rider acknowledged. “I have to add that I think all of the riders are appreciative of Adequan’s support for the sport. I think Adequan’s involvement in the sport is greatly underappreciated for the amount that they do, and I know that we all really appreciate it. I also have to say that it is a huge honor to beat every rider in this class, but especially to beat Laura Chapot. I think anybody that competes the rest of the week in the other rings knows how much she wins and how difficult it is to beat her. Laura – I mean this with the utmost respect, but beating you tonight tastes so good!”

With her second place round, Laura Chapot’s mount ISHD Dual Star marked a great start to her season as well, and Chapot was very happy with the performance. The mare jumped well in her first Saturday night grand prix just last week and continues to excel under the lights.

“This is probably the most difficult course I have shown with her,” Chapot noted. “I was very, very pleased with the way she went. My plan in the jump-off was really to just put in a clear and prompt round. I think there were a couple of places I definitely could have been a lot faster, but I really just wanted a good, solid round, and to try and make everyone else try and beat that. She is a naturally careful horse, so I had to take a few little chances. She tries hard, and she was jumping great. She is a good Irish horse.”

Wilton Porter’s horse, Diamonte Darco, was jumping in her very first Saturday night class, and Porter was focused on giving his mare the best experience possible.

“This was my first time competing in a Saturday night WEF grand prix with her, so I am really happy with her,” Porter stated. “My plan was the same as Laura. I wanted to have a nice, prompt round in the jump-off and have a positive experience for my hose. She was really good, so I am pretty pleased. I went as quick as we were comfortable with. I think we were probably a little bit wide turning back to the second to third jump in the jump-off and maybe lost some time there, but I think as we keep going along with her, I will get better at doing that. It will become quicker and quicker as we get tighter.”

Grand prix and week three title sponsor, Adequan® i.m. (polysulfated glycosaminoglycan), is a registered trademark of Luitpold Pharmaceuticals, Inc., a company committed to advancing the healthy equine joint and supporting the equine industry. Allyn Mann, Director of the Animal Health Division at Luitpold, was on hand to witness the fantastic competition on Saturday night and spoke to the top three competitors following the class.

“We are just really blessed to have the opportunity to be involved with Mark (Bellissimo) and the Winter Equestrian Festival as well as the Adequan® Global Dressage Festival,” Mann stated. “It is two completely different environments, but the people are so special and that is really what the journey is all about. It is not the places that you go; it is the people that you meet. It is just amazing to see these athletic animals and these riders compete in such a way. These jump-offs make the sport so exciting. It is about the competition, the athleticism, and the love that we all have for the horse. We are honored to be a part of it and Mark, thank you for making this such a special place.”

Equestrian Sport Productions CEO Mark Bellissimo concluded the evening, stating, “I just want to mention that Allyn has been spectacular. There were great athletes here tonight, and it takes great sponsors to make this work. Allyn has been such a great support the last several years and we are excited about that relationship and hope we will be working more and more together in Wellington. I really appreciate it and thank you.”

This morning in the E. R. Mische Grand Hunter ring, Emma Kurtz and Graffito kicked off hunter action on a positive note. The pair earned scores of 84 and 80 to finish first and second in the final two over fences classes of the Charleigh’s Cookies Large Junior Hunter 15 and Under division. After two stellar jumping rounds, Graffito went on to win the under saddle and finish the day as champion.

Giavanna Rinaldi and Bella Luna, owned by Golden Oaks Farm, ended the day as reserve champions of the Charleigh’s Cookies Large Junior Hunter 15 and Under Champion. Bella Luna won two over fences classes and was second in the under saddle.

In both over fences classes Graffito and Kurtz were in sync, despite yesterday being their debut in the Junior Hunters. Even with little practice time, Kurtz, from Hudson, OH, guided Graffito to top ribbons. “The first day I was getting to know him [Graffito] a little bit, and the second day he was amazing!” Kurtz smiled.

Graffito is a 10-year-old Warmblood gelding owned by the Hidden Creek Farm. Competing earlier in the week with Chrystal Knight in the CWD Saddlery Performance Working Hunter 3’6″, Graffito was ready for Junior Hunter competition. Describing Graffito, Kurtz said, “He just has such a huge stride and it took me a day to get used to it, but he was great both days!”

With the new combination off to a winning start, Kurtz looks forward to showing Graffito in upcoming weeks at WEF. Along with competing in the Large Junior Hunters, Kurtz also shows in the Small Junior Hunters, Green Pony Hunter divisions and the 3’6″ Equitation.

Enjoying success in the hunter ring, Kurtz is also focused on the progressing in the equitation. Currently Kurtz’s goal is to qualify and compete in the George Morris Excellence in Equitation class held during WEF 11.

Kurtz started her riding career at the age of five and has been competing seriously for the past five years. During the WEF circuit, Kurtz lives in Wellington full time to keep up with the demanding show schedule. Looking ahead Kurtz plans to continue her riding career in college.